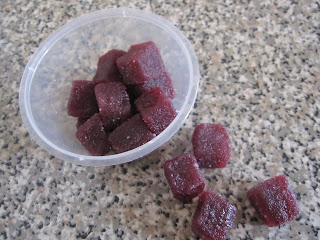 Many years ago I learnt to make quince pâté/paste: a delicious concoction that you can serve on crackers with cheese or simply nibble on on its own.  Then a year or two ago I purchased guava paste - the same general idea, but made from tropical guavas.  Right now we're in the middle of a major guava glut so I decided to have a go at making guava paste with our own strawberry guavas.  The result was delicious.  We've simply been cutting it into cubes, rolling it them in caster sugar and eating them like jubes although think it'd be nice on crackers with cheese as well.

Should you like to have a go at making your own guava 'jubes', it's very simple.

1. Simmer guavas until soft with a small quantity of water (just enough to stop them burning - we used about 1/3 cup water to 2 litres guavas).
2. Pass through a mouli to remove all the seeds (you could force them through a regular seive if you didn't have a mouli, but it'd be a bit of a pain).
3. Put the pureed guavas in a wide pan with an equal volume of sugar (we used our big preserving pan and the high sides were great as they meant that the splatters were contained as the paste was cooked down).  You only want about 2-3cm of puree/sugar mix in the bottom of the pan.
4. Bring to the boil and cook, stirring constantly, until the mix has reduced to about half the volume and you can draw a wooden spoon right across the pan before the trace fully closes up.
5. Pour into non-stick containers to about 1cm depth and leave to cool (which will take hours - it holds its heat amazingly).

Store between layers of baking paper in air tight containers.  Should easily keep more than a year.  Yum!
By Heather - May 13, 2012