Should churches marry members of the public?

Recently I heard an interview on Radio New Zealand National in which lawyer Grant Ilingworth discussed some of the legal implications of the Marriage Equality bill currently before parliament.  His view is that, as churches marry members of the general public, they wouldn't be able to refuse to marry a couple on the grounds that they were of the same sex.  Institutions that offer services to the public are covered by the Bill of Rights (IIRC), which states that such institutions can't discriminate on the grounds of sexual orientation.

His view doesn't appear to be uncontested, but regardless, it led me to what I suspect is an important question.  Should churches be marrying members of the public (as opposed to only marrying people within our own church communities)?

An opinion piece in a recent edition of The Baptist included this sentence:


Ephesians 5:22-33 provides us with the Apostle Paul’s pattern for how this male/female marriage is to function as an outworking of a man and woman’s mutual confession of their sin and faith in Christ, which forms the glue to their convental commitment with one another in marriage.

When I got married I was conscious of making a covenantal commitment in the presence of God and my community.  However, many of my married non-Christian friends don't even believe that God exists.  They certainly haven't made a "confession of their sin and faith in Christ" at any point, nor were they calling on God to bear witness at the time of their marriage.  It seems to me that their marriages aren't any more Biblical than a same-sex marriage.

Hence my question: should the Church solemnise such marriages?  Especially if we are unwilling to solemnise other marriages on the grounds that they are unbiblical.

Such a policy would mean that all marriages conducted by churches would have to meet whatever conditions the Church (or church) thought necessary in order for the marriage to be genuinely Biblical.  It is highly unlikely that such a policy would prevent clergy from ever being asked to marry same-sex couples, but it would mean that they would be able to respond to such a request by discussing its Biblical merits.  Potentially even by asking the couple why they felt that it was appropriate for them, as Christians, to contract such a marriage.

Were we to refuse to marry any couples from outside of the Christian community, that would presumably also have the handy extra consequence of preventing us from falling foul of the sexual orientation discrimination provisions in the Bill of Rights as we would no longer be an institution offering a service to the public.

NB: I'm not really posting this for my regular readership but so that this information is available on the internet should someone one day come looking for it.
Nearly two years ago I had a Mirena IUD inserted.  Within days of the insertion I developed a uterine infection that caused such severe pain that the Mirena had to be removed after three weeks.  The pain resulted in me developing a condition known as central sensitisation.  Whilst I had the infection, nerves that normally send other kinds of signals had been commandeered to send pain signals in order to convey to my brain the severerity of the situation.  Once the infection was eliminated, these nerves didn't return to their normal functions as they should have and instead continue to send pain signals.  This means that, even though I no longer have an infection, I continue to live with significant pain (although that pain is now reasonably well controlled and I am hopeful that it will eventually be eliminated altogether).

I am sharing this story as I believe that my severe chronic fatigue syndrome made an infection following the Mirena insertion a near-certainty.  It also seems that the resultant central sensitisation was much more likely to occur in a person with CFS than in a healthy person.  I in no way blame my GP for not realising the risks involved in giving me an IUD, but I wanted to put the story on the internet in the hope that other women with CFS would be aware of these possibilities!

Likelihood of infection
As mentioned above, I have very severe CFS/ME.  For the past nine years I have had around 15% of the energy I had before I became ill.  I am only able to be out of bed for a total of three hours per day; I use a walker to walk within the house and a wheelchair for any trips outside.  My muscles are thus extremely deconditioned.  It is this that both I and my gynaecologist now believe made a uterine infection almost inevitable once I had had the IUD inserted.  Once the (tiny!) weight of the IUD was added to the weight of my uterus itself, my deconditioned pelvic muscles were too weak to continue holding my uterus in its proper place.  The Mirena thus bore down on my cervix such that it was pushed very close to the opening of my vagina.  At this point infection became inevitable: the strings attached to the Mirena, whilst only 3cm long, were from time to time pushed right out of my vagina to regions where they would have come in contact with bacteria.  These bacteria then travelled up the strings into my uterus where they multiplied and caused me such severe pain that several times I thought I might pass out.

According to Dr. Ros Vallings' report from this year's "Invest in ME" conference in the UK, people with CFS have abnormal pain processing systems.  In particular, Professor Maria Fitzgerald's paper apparently noted:


In CFS/ME there is altered CNS processing.  Fibromyalgia (FM) patients perceive greater intensity and greater temporal summation.  Sensations increase in magnitude, and the CNS winds up more and more. There is alteration of endogenous pain control.  FM patients lack diffuse noxious inhibitory control.  Normally there is ability to inhibit pain (endogenous opioids).  There is altered cortical pain processing in CFS/ME.  Numerous areas of the cortex are involved. There is activation of the limbic system (anterior insular-based ganglia and cingulated cortex). The CNS is acting very differently.

So it seems that there is something abnormal in the way people with CFS process pain signals.

In addition, Professor James Baraniuk is reported to have made the following observations about fibromyalgia patients:


There was increased sensitivity to deep pressure in FM. There was also increased sensitivity of proprioceptive and stretch receptors on nerves innervating the joint capsules, tendons etc. There maybe loss of the anti-nociceptive system, and loss of norepinephrine release, which normally regulates responses, and initiates autonomic responses. It is as if “the light is on but no-one is home”, and the brain is in a default mode pathway.
He looked at pain dolorimetry – pressure-induced thresholds, and did frequency analyses.  Central sensitization starts in the periphery – there maybe peripheral sensitisation such as by hay fever. Spinal sensitization leads to hyperalgesia and allodynia.

I don't really understand what he is saying beyond that he mentions something about central sensitisation occuring in fibromyalgia patients.  As he was speaking at a chronic fatigue syndrome conference (not a fibromyalgia one) I presume he means that similar things are also observed in people with CFS, although there is no indication in Dr. Vallings' notes that he actually said as much.

These snippets make me wonder if central sensitisation following severe pain (as described in Dr. Woolf's paper linked to above) is more likely to occur in someone with CFS as our pain processing systems are, apparently, already not working properly.

If your CFS isn't as severe as mine then I suspect that the above scenario is unlikely to happen to you.  If, however,  you are very inactive and your muscles don't always hold your innards in place like they should then please be aware that it is a possibility!

PS, if you'd like to know more about any of this, please put a question in the comments or email me.
By Heather - September 15, 2012 No comments: 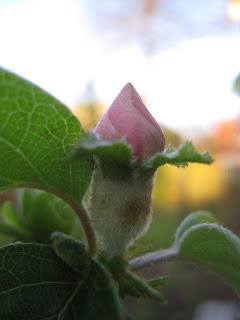 Last week, Martin took this photo of one of the first blossoms on our quince tree.  I think it's beautiful :-)
By Heather - September 08, 2012 No comments:

There was an interview with Ros Vallings, my CFS specialist, on National Radio this morning.  You can download it from here, should you wish to listen to it.  It's about 30 minutes.
By Heather - September 08, 2012 No comments:

Over the last couple of months Martin and I have been making our way through the book of Isaiah in the Bible's Old Testament.  As we've read I've been struck by Isaiah's contemptuous dismissal of idols and of those who put their trust in them.  Idols are described, in essence, as 'gods' in which people put their trust, but which are actually so powerless that their worshippers look after them, rather than the other way around.

Isaiah is talking about literal idol statues: 'gods' that rely on people to make them, to carry them from place to place, to put them down carefully so they don't fall over etc.  Not many 21st century Pakeha worship such gods, yet we still put our trust in things that require us to tend them.  Money is a common one - requiring us to invest a lot of time and effort carefully making it grow so it can later protect us from hard times.  Houses can be this way, too, when they become more than shelter and morph into a repository of 'equity'.  Reading Isaiah this morning I realised I've allowed Martin's income protection insurance become such an idol.  There's an exclusion on the policy for a medical problem he's had in the past.  If by July 2013 he hasn't had the problem again, the exclusion comes off.  I realised that I've become anxious about that deadline: concerned that the problem musn't come back, even wondering if he should go to the doctor (and hence admit to it) if it does.  I realised today that I've been carefully managing the insurance so that I can put my trust in it, rather than just having insurance but putting my actual trust in God.

Our God is quite different from the idols.  He's not just more powerful, He's also more 'willful'.  Take this, for example, from Isaiah 45:


9 “Woe to those who quarrel with their Maker,
those who are nothing but potsherds
among the potsherds on the ground.
Does the clay say to the potter,
‘What are you making?’
Does your work say,
‘The potter has no hands’?
10 Woe to the one who says to a father,
‘What have you begotten?’
or to a mother,
‘What have you brought to birth?’

We are the clay, God is the potter.  We can't question how he chooses to act - even if He chooses to act, as He is here, through an army who is raping and pillaging their way across the landscape. In a way, Isaiah presents us with a simple choice.  We can put our trust in idols, who might look like they do our bidding but who really don't do anything at all; or we can put our trust in God, who will do what He wants rather than what we want, but who is, at least, all-powerful.


2 Why do the nations say,
“Where is their God?”
3 Our God is in heaven;
he does whatever pleases him.
4 But their idols are silver and gold,
made by human hands.
5 They have mouths, but cannot speak,
eyes, but cannot see.
6 They have ears, but cannot hear,
noses, but cannot smell.
7 They have hands, but cannot feel,
feet, but cannot walk,
nor can they utter a sound with their throats.
8 Those who make them will be like them,
and so will all who trust in them.

You can put your trust in the God who does whatever He pleases, or you can be as blind, deaf and immobile as an idol statue - how's that for a choice!
By Heather - September 04, 2012 No comments: