Neighbour's Day is coming up in just over 4 weeks: Saturday March 28th - Sunday March 29th.  If you want to get to know your neighbours, this is your chance!
We've really enjoyed Neighbour's Day in the past, so I encourage you to give it a go!  It can be as simple as inviting some near neighbours over for a cuppa or as full-on as throwing a party for your whole street: whatever works for you :-)

Silvereyes in the Elderberry

When we moved here, we planted an elderberry just to one side of my bedroom window.  We wanted it mostly to make cordial from the flowers, but this year we got more flowers than we needed so we have had a lot of berries, too.

I've eaten some, but the best way to enjoy them is to watch the silvereyes eating them.  Here's two that visited today :-) 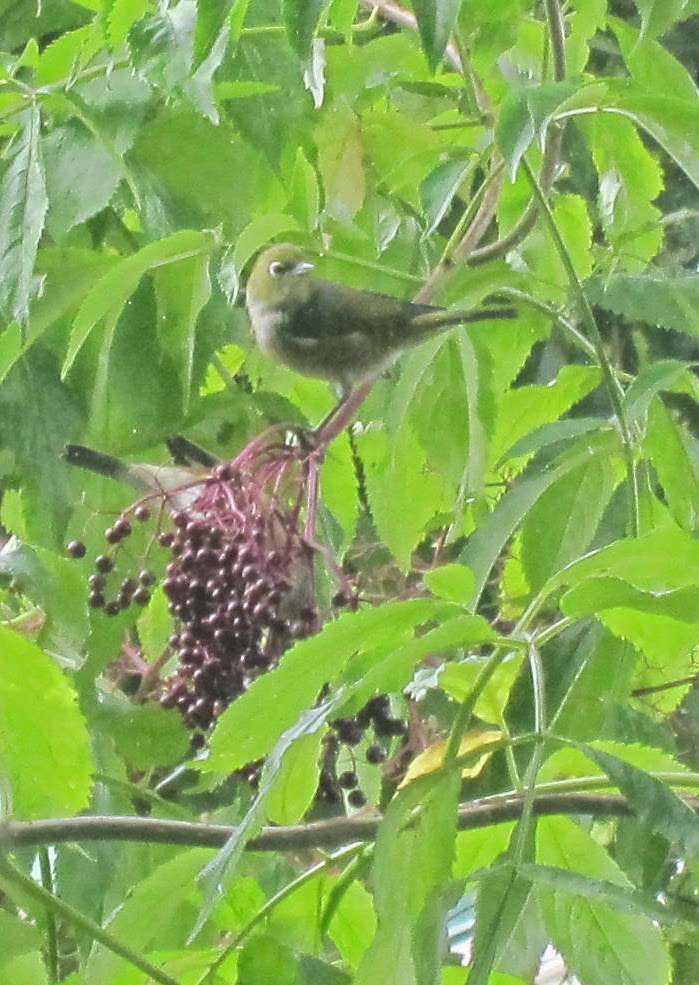 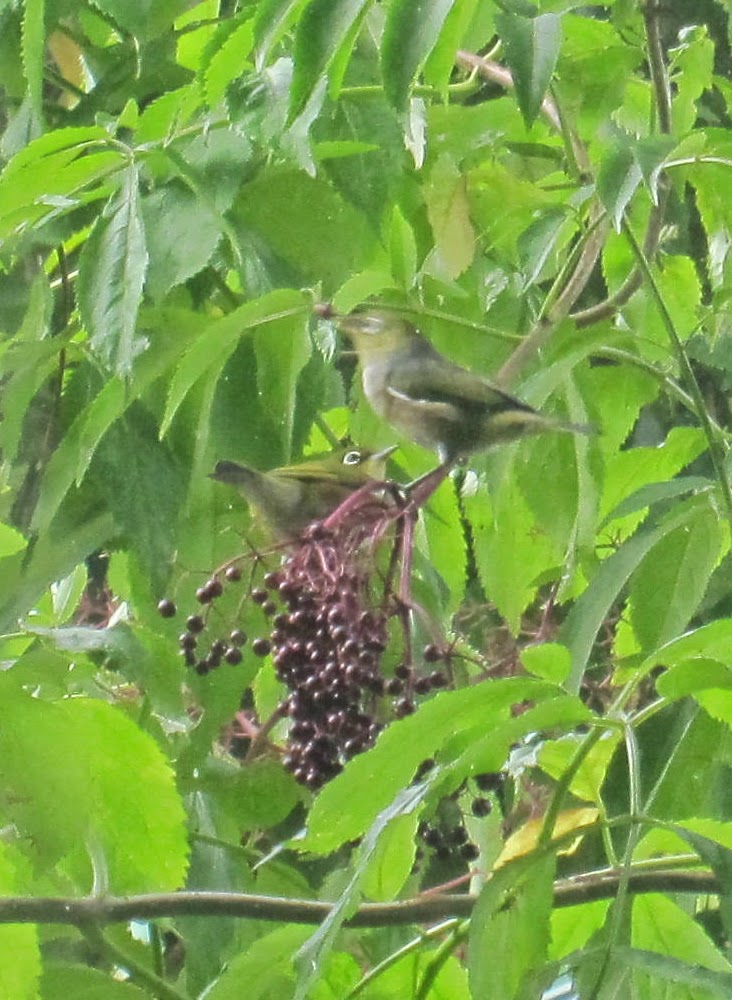 Email ThisBlogThis!Share to TwitterShare to FacebookShare to Pinterest
Labels: birds

In recent days I've had cause to spend some time on the WINZ website.  Whilst there, I was confronted with something I've been shocked by before:
Around $80 a week is a big difference.

If the older couple have health problems of their own, the discrepancy becomes greater:
Around $200 a week is a huge difference!

Similarly, if the two couples needed assistance with housing costs, the help offered to the older couple would be a lot more generous than that offered to the infirm couple.


The data I'm working from is all on this pdf.
Note that benefits for people with permanent health conditions are known as "Supported Living Payments" these days, not Invalids Benefits).

This seems to me blatantly unjust.  I'm OK with the unemployment benefit (known these days as "Jobseeker Support") being at a lower rate than Superannuation: you're not expected to be unemployed for the rest of your life so it's not so important that it's at a long-term liveable rate.  But I'm not OK with those who are unable to work being treated worse than those who are simply old.  After all, the only reason we give financial support to older people is because we consider them too old to be able to work!

I'd like these Superannuation and Supported Living Payments to be set at the same level.  People who won't be able to work again for the rest of their lives and people who are too old to work again have the same needs and so should receive the same support.  I don't hugely mind which level the two benefits are set at (i.e. at the current rate of Super, the current rate of the Supported Living Allowance or somewhere in between), but I strongly feel the rate should be the same.

If it's considered politically impossible to lower the rate of Super then this proposal would increase the government's costs.  In that case, I'd propose raising the age of entitlement to Super to 70 (in order to make the change fiscally neutral) but with one proviso.  Anyone aged between 65 and 70 who was assessed as unfit to work due to their physical or mental health, and who is assessed as being likely to stay that way for at least 6 months, would receive a Supported Living Payment.  Once assessed as eligible, they would remain eligible until they turned 70, without periodic reviews.  This would mean that, in effect, between the ages of 65 and 70 Super would be needs-assessed, and from the age of 70 it would be a universal entitlement.

Why?  With increasing life expectancies, many people are staying healthy and able to work well past 65.  It makes sense to me to increase the age at which we say that you are probably no longer fit to work in order to give money to those who have actually been assessed unfit to work.  However, some people (e.g. people who've done physical work like shearing or people who just have bad genes) get 'old' at a much younger age.  It seems harsh to force those people to either continue trying to work or to perpetually prove their incapacity once they've demonstrated their working days are done.  Not requiring regular reviews would also save money, and I doubt it would result in many people fraudulently receiving this special Supported Living Allowance at any time as you could only receive it for a maximum of 5 years anyway.

If life expectancy continues to increase, I'd want to periodically increase the cut-offs for eligibility both for Super and for this special Supported Living Allowance.

I'm not sure what to do with my idea.  Does anyone know?  I know that John Key has emphatically stated that he's not going to increase the age of entitlement to Super so long as he's Prime Minister, plus his government has really tightened up entitlement to other benefits, so it's probably not worth talking to him.  I guess that means I should try and lobby Labour or the Greens, but I don't know how to go about getting their attention on an issue that's not one of current debate.  Any ideas (or any feedback on my solution to the current unjust system) would be appreciated!
By Heather - February 17, 2015 No comments:

The other day, I was delighted to receive my first ever fair trade knickers!  They come from PACT, one of only two companies I've found that do fair trade underwear (the other is Pants to Poverty, sold in Australia by Etiko).
Why was this so exciting?  It means that I'm able to buy more of my clothing from higher in our buying hierarchy.

In general, Martin and I try to buy clothes (and other textiles) in the following order of preference:
How high in this hierarchy we buy depends on what we can afford as well as what we can find in the time we have available to look for it.  I'm delighted to have been able to buy knickers from higher up than we've previously managed.  They're also super-soft and comfortable :-)

PACT is based in the US, and shipping to NZ starts at US$25 (or get a US friend to onship them for you - shipping within the US is free if you spend more than $25).  Pants to Poverty ships to NZ for £25 (although they offered to halve that for me if I bought 5 pairs or more).  If you buy their products from Etiko, shipping starts at Aust$18 and is free if you spend Aust $200 or more.

If you intend to buy anything from PACT, could you let me know before you do?  They'll give me a reward for having referred a friend :-)  Thanks!
By Heather - February 12, 2015 No comments:

For Christmas, my 'almost family' gave me a bleeding heart vine.  I'd never seen one before - turns out it's native to West Africa but can grow here as a house plant.

When it arrived, it was covered with red and white flowers, like this:

When we returned from holiday, all the flowers had died.  I trimmed most of them off (hoping to encourage more), but left a few by mistake.

I noticed the other day that this had happened: 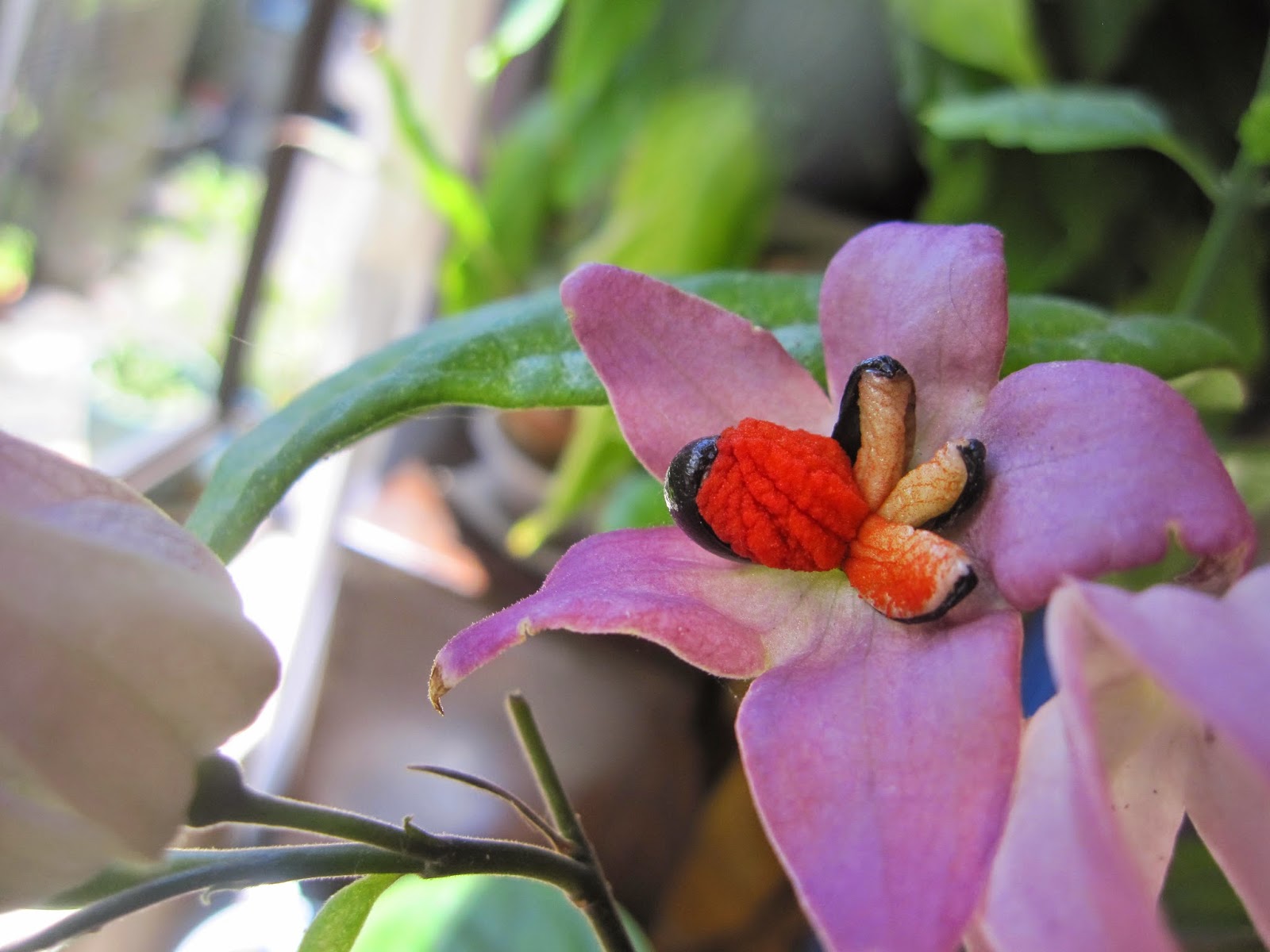 As I was trimming off the dead flowers, I'd noticed a green 'knob' in the base of some of them.  In the flowers I'd left on the plant these had burst open, revealing a shiny black seed coated with orangey-red powder.  Two of the remaining flowers have these and I think they're stunning!

It also has deeply veined leaves that look beautiful with the light behind them. 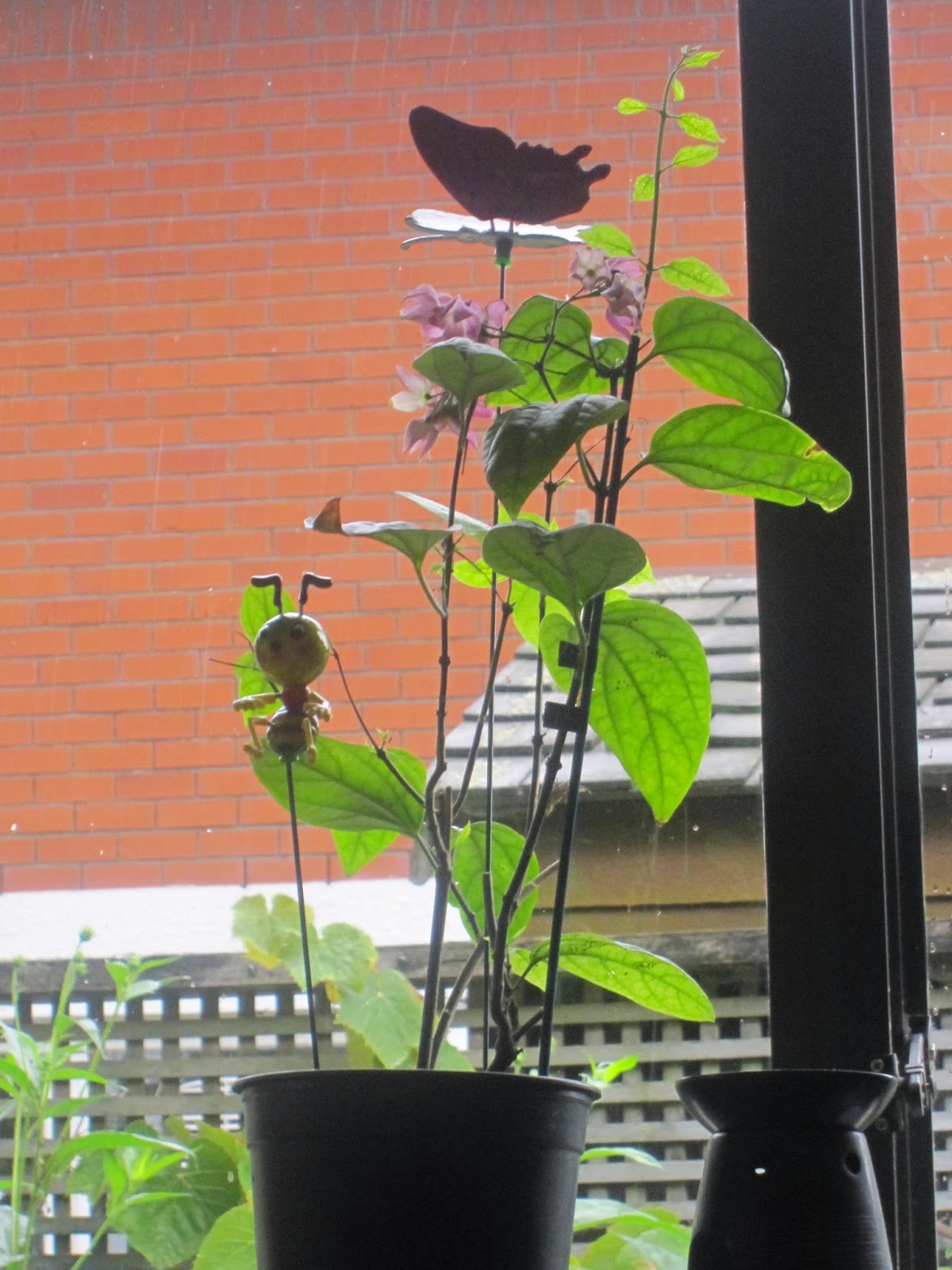