Ages ago, a foraging blog I used to read taught me that kawakawa plants, not only produce leaves that make yummy tea: the plants come in male and female variants, and the females produce delicious berries.

I haven't managed to find anyone who sells 'sexed' kawakawa seedlings, but a few years back I did find someone selling lots of 8 seedlings very affordably.  So I bought them, and planted four each on either side of the oak tree.  My hope was that there would end up being at least one male on one side and at least one female on the other: when they revealed themselves, I would kill the rest :-)

Unfortunately, it initially appeared they were all male.  For some years now we have had many male cones appearing on both sides of the tree.  The seedlings are also all now large plants that are thoroughly intertwined: uprooting unwanted ones (without disturbing the others) is no longer an option.

Then, maybe a month back, I noticed one 'zone' on one side of the tree was covered in bright orange female cones.  I had at least one female after all!  I got to work picking the berries, and also cut back all the branches without berries: hopefully that will give the female plant lots of space to take off in future :-)

The woman whose blog taught me about kawakawa berries likes them dipped in chocolate.  I tried that, but wasn't convinced.  The orange fruit of the berries is sweet, perfum-ey and a tiny bit numbing (kawakawa leaves are very numbing - they were traditionally chewed for toothache because of this).  The seeds, on the other hand, are just potent - I'm not really sure of good words for what they taste like.  When I eat them straight, I kind-of suck them without chewing, so I mostly taste the flesh without the seeds.  My dipped berries still had the seeds in, and were just a bit much.

However, after I dipped the berries I left the rest of the chocolate I'd been using to re-harden.  I must have dropped a bit of berry in it as, when I ate it, it was infused with delicious kawakawa berry flavour.  That gave me an idea!  Dry the flesh and use it to flavour chocolate truffles :-)

I haven't actually made truffles yet, but I'm building up a jar of dried berries: 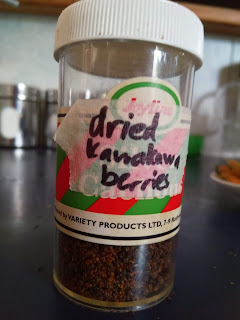 What you see is mostly seeds.  The flesh shrinks away to nothing when you dry it.  I may add this into the molten chocolate for the truffles as-is, or I may infuse it into the cream and discard the actual seeds - not sure yet.

Before drying the berries, I remove their central stems (I did this before chocolate-dipping, too).  I love how brightly orange they are! 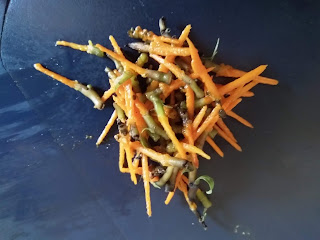 Once the stems are removed, the berries are very fragile and pulp easily with a spatula.  They then get plopped on a dish, spread out, and dried at around 90 degrees C for 3-ish hours.  Once that's done I separate out the clumps in the mortar and pestle then add them to my jar. 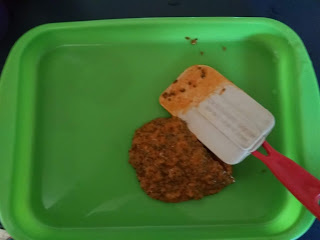 In the future, I may try passing the pulp through the mouli to remove the seeds - the pulp on it's own is delicious and would be great on ice cream.  I've also measured the volume of berries this time, and will measure the volume of dried stuff I end up with - that way I can know how many spoons of dried stuff to use if I want to use it for relish :-)
By Heather - February 07, 2020