A couple of weeks back, Martin and I spent a week in Whangarei.

On the Monday/Tuesday we went across to Dargaville to visit Edmonds and Sarah, our former pastors. 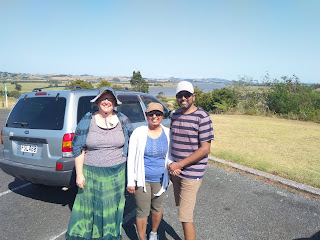 They've set up their house beautifully.  I particularly liked this painting in their spare room. 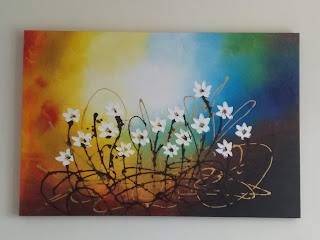 They took us to Kai Iwi lakes for the afternoon/evening. 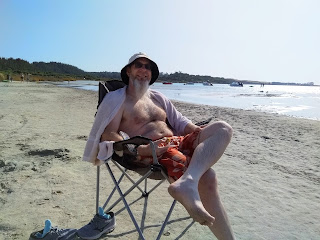 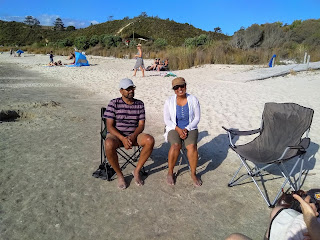 Then up Tokatoka Peak the next morning.

It was fun, but unfortunately much too much for me for 24 hours.  I spent most of the rest of the week catching up on myself, and barely left the house until it was time to go home :-(

Martin, on the other hand, left the house a few days later for an incredibly successful fishing trip.  He went with Dad and his friend Colin, and they ended up catching 21 fish (the legal limit for snapper - 7 each) and coming home early!

Then back in Auckland, last week on Thursday we went to the Waitangi Day celebrations at Okahu Bay with our friends the Tearles (who are visiting from the US).  Martin, Sarah and I caught the train to Britomart with our bikes, then biked along the waterfront to the beach.  Once there, I particularly enjoyed eating a gigantic mussel fritter :-)


I was pretty tired by the time it came to biking home, but made it OK.

One last outdoorsy thing.  I've been trying to work out where to go to swim 'lengths'.  I've always loved swimming and I don't mind cold water, but I don't want to bike a long way to or have to catch two buses to get to the water.  This rules out any actual pool I know of.  Then it occurred to me that Blockhouse Bay Beach, which I've generally disdained as it's so flat and boring, might be just the ticket.  It's working really well!  I've been three times now.  I catch the bus to Blockhouse Bay shops, walk down the hill, swim back and forth across the bay then come home.  From the satellite image on Google maps, it looks like it's 145m between the landmarks I'm swimming between (once you move the markers in a bit to account for the shallow bits at the edge); I can do 4 'widths' in half an hour or 6 in 45 minutes, depending on how much time I have.

The only thing is I've found I need to be very careful with the tide - to be deep enough, it needs to be more than 3.8m deep on the tide chart, preferably more like 4.0 or 4.1m (I have no idea where this is measured - 3.8m translates to a bit over my waist height when I'm out towards the open end of the bay).  So, whilst I've been going weekly the past three weeks we've been in Auckland, it's been at different times of day and days of the week depending on the time.  For most of February, Fridays look good!

I've been enjoying it so much.  It's a beautiful spot, and it's lovely sitting on the shore afterwards watching the sun sparkling on the water.  Lots of other people exercise there, too - I've seen kayaks and paddleboards as well as walkers and other swimmers - and everyone's very friendly.  I'm so grateful to be able to go there.


This Saturday, Martin came with me and was surprised how much he liked it, too :-) 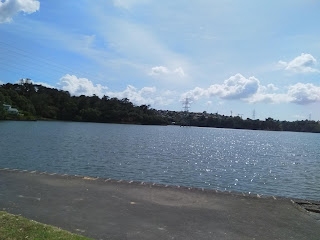