Martin recently came across a fantastic interview about sustainable agriculture.  In it, chef Dan Barber talked about what he's come to call 'Third Plate' eating.  He thinks of what Americans have been eating since colonisation as the 'First Plate' - basically a large piece of meat with a few other things on the side.  More recently, he's seen the rise of the 'Second Plate' - the development, inspired by sustainability concerns, of swapping locally sourced and/or organic meats and vegetables for the conventionally grown ones.

Dan Barber was essentially serving 'Second Plate' food at his New York restaurant when a visit to the organic farm that grew his wheat radically changed his outlook.  He visited in the off-season and was startled to see the entire farm covered in unfamiliar crops: no wheat in sight.  What he was seeing were the cover crops, without which the land would be unable to produce wheat later in the year.  They were also mostly human-edible, but were all either sold for animal feed or ploughed under.  No one could be found to buy them as human food.

That eventually turned him into an ardent advocate for a much more sustainable 'Third Plate'.  On this new plate, instead of finding the same foods simply grown differently, you find food that is served in the kind of ratios you need to grow it in order to sustain productive land.  In his region, that means eating a lot of legumes and buckwheat in place of much of the more familiar meat and bread.  Listen to him expanding these ideas here.

This afternoon I heard a bird fly past my window - it was loud and looked, from the corner of my eye, to be large.  I assumed it was a kereru that had been feasting on our guavas. and eagerly craned for a better look. To my surprise, I saw this on the neighbour's porch: 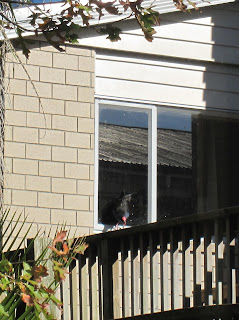 A pukeko!!  A pukeko had flown past my window!  We get them on the lawn sometimes, as we live near Te Auaunga/Oakley Creek, but a flying one is something new!

Last October, I was given a moth orchid.  It was a gorgeous plant and I was delighted - but also a little daunted.  Orchids have a reputation for being fussy plants and I felt pretty sure I would kill it.  I had to keep reminding myself I was under no responsibility to keep it alive - I should just enjoy it for as long as I had it and leave it at that.