The other week Auckland spent a week at Covid Alert Level 3 - which, from my point of view, mostly means no buses, infrequent grocery shopping (with everything getting washed or put in quarantine) and Martin and Sarah working from home.  This time it also meant really not leaving the property for a couple of days, as I had a bit of a sniffle so had a Covid test on the Monday and we were told to not even go out for a walk till the result was back.

Still, I had quite a fun week.

A house on our street was knocked down that week to make way for 6 townhouses.  On the weekend (before my sniffle) Martin and I went scavenging and came back with these glorious flowers. 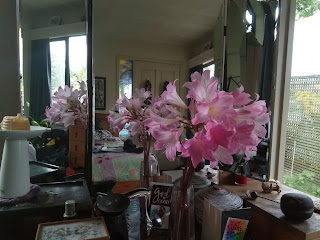 The story of Naaman's healing

Today I read the story of Naaman in 2 Kings 5:1-19.  I won't write it out here as it's long, but what I say below might not make sense without reading it.

I was really struck by two things:

I find the second point particularly interesting.  We often act like God provides specific material help to Christians, but that non-Christians only get the generic help of 'the rain falls on the just and the unjust'.  Which means I'm often uncertain how to pray for non-Christians in need of actual help.  This story encourages me to pray for them in the same way I pray for Christians.

But the first point is also interesting, too, in terms of how God's agents are primarily in His control, and may or may not otherwise occupy the positions we expect.

I'm also fascinated that Naaman asks for a large quantity of earth to take back with him.  I presume this is to do with the idea that gods are associated with particular locations.  Now that Naaman wants to worship the God of Israel, he wants to take a bit of Israel back home with him to enable him to do that!