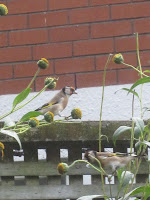 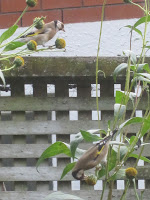 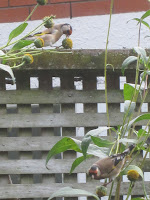 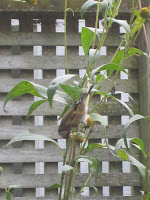 Our Jerusalem Artichokes really are the gift that keeps on giving! 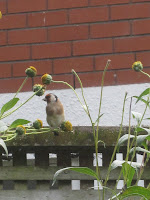 The flowers have all finished now and we're just waiting for the plants to die back before going hunting for tubers.  But then on Sunday afternoon I noticed some goldfinches eating seeds (presumably) out of the flower heads.  Martin and I were transfixed, often laughing, seeing one clinging upside down on a wildly swinging stem pecking up at a flower head, then another perched precariously on a head itself, picking between it's toes.  Maybe next year we won't be dead-heading the plants as the flowers die?

(Apologies for the poor quality pics - we were inside, and I actually did most of my bird-watching with binoculars!)
By Heather - March 30, 2011 1 comment:

Was the prodigal son a rice Christian?

Today I read Luke 15:11-32 in the Bible - the story of the lost (or prodigal) son.  It's a well-known story: younger son asks his father for his half of the inheritance, goes off and squanders it on wild living, repents and comes home.  Father is delighted to see him and throws a party, older son who's stayed at home working is very angry and resentful of all the fuss.

The bit that I'd never thought about before was this:


When he came to his senses, he said, ‘How many of my father’s hired servants have food to spare, and here I am starving to death!  I will set out and go back to my father... Luke 15:17,18a NIV

He didn't go back to his father because he'd repented - he went back because he wanted to get something to eat.  It was when he began to imagine the encounter with his father (who is believed to symbolise God) that he works out his little speech about how sorry he was.  And when he meets his father, he doesn't seem all that interested in the prepared statement anyway.

I'm not too sure what to make of the father's lack of interest in the repentance speech, but the fact that the son came back primarily for the food fascinates me.  Was he the first rice Christian?  The story seems to confirm what I've seen in real life: people come to God for all kinds of reasons, but when they encounter God (or in this case, even when they imagine that encounter) their outlook is changed.  So it doesn't matter why you come to God: so long as you come to Him, His agenda will soon start to take over!
By Heather - March 25, 2011 No comments:

Today I came across an organisation called The Girl Effect.  Whilst I haven't dug into their website to find out what they actually do, I was very struck by their promotional video.  Watch it and learn what a difference it makes in developing countries whether or not girls receive education.  And then watch these videos in which five girls from Ethiopia, India and Bangladesh describe their lives and their dreams for the future.  I found them both inspiring and sobering.
By Heather - March 18, 2011 No comments:

To whom much has been given....


Familiar words, but seeing it in context I realised it didn't mean what I'd always thought it did.

It comes at the end of Jesus telling two stories of servants who are expecting their master's return but don't know quite when he will show up.  Whether or not they are found being obedient to their absent master at the moment of his return results in either favours or punishment.  Between the two parables he spells out what he's actually talking about:


You also must be ready, because the Son of Man will come at an hour when you do not expect him.  Luke 12:40, NIV

Then comes the final section:


The servant who knows the master’s will and does not get ready or does not do what the master wants will be beaten with many blows. But the one who does not know and does things deserving punishment will be beaten with few blows. From everyone who has been given much, much will be demanded; and from the one who has been entrusted with much, much more will be asked.  Luke 12:47-48, NIV

Whilst I baulk at the violence of the master beating the servant, the overall message seems clear: those who know what Jesus requires of them and don't do it will be judged more harshly than those who simply don't know what is required.  So this verse actually sheds light on the question ‘what about those who have never heard’ rather than being, as I've always thought, an injunction to the gifted to use their gifts for God.
By Heather - March 18, 2011 1 comment:

Our garden brings me so much joy!

This is what I look across at each day while I eat my lunch and get my Vitamin D: 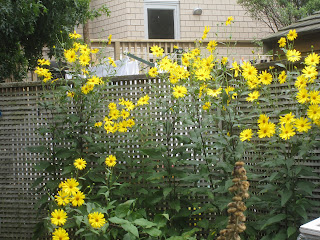 The bumble bees absolutely love these flowers (Jerusalem artichokes) and I've had fun watching them through my binoculars out my bedroom window as they go about their business collecting pollen.

We're also harvesting all kinds of interesting things at the moment.  Nothing in vast quantities, but I'm enjoying figs (the first year our tree has fruited), tomatoes, beans, herbs, the occasional strawberry and now: 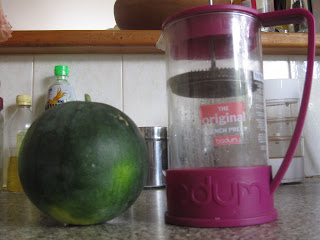 our first watermelon!  It's a 'sugar baby' and supposed to be small (the coffee plunger is for scale), and it was yummy.  We've got another three pretty much ready, and a few more that will hopefully get up to size before it's too cold for them.
By Heather - March 04, 2011 No comments: