Showing posts from May, 2020
Show All

By Heather - May 18, 2020
I have found the transition to Covid-19 alert level 2 surprisingly difficult.  At least, I think that's what it is!  Today and yesterday I seem to have been getting upset uncommonly easy.

I found the move to having an alert system and rapidly moving through levels 2, 3 and into 4 not too bad.  It took adjustment to have Martin and Sarah at home all the time.  I'm used to being on my own a lot and found that quite overwhelming initially.  But we have a large house where all three of us can easily be fairly separate, and after a week or so that became much less of an issue.

By Heather - May 02, 2020
Over the course of the last six months or so, I've put into place a number of survival strategies that have helped me cope with the big change in my life.  I wrote earlier about Sabbath-keeping and care-casting.  Since then I've added two other practises that have also been super-helpful. 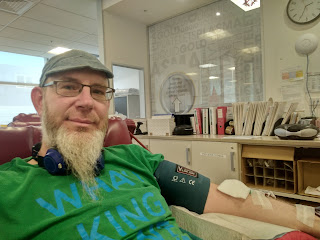