A Holiday in Te Aroha

Martin and I spent last week on holiday in Te Aroha with his aunty and uncle.

I frequently hear people arguing against Muslim immigration as it will lead to Shari'a courts being established in New Zealand.  After all, they say, such courts already operate in parts of the UK and/or Australia.

When such people talk about Shari'a courts, it seems they are thinking of the kind of courts operated by the Taleban or ISIS - courts which hand out sentences such as stoning for adultery.  If that's what comes to mind, I can understand why people don't want that here.

However, is that what really happens in the UK or Australia?  Does a court really sentence a woman to stoning or a man to have his hand cut off and it is done?  I seriously doubt it: those things are serious crimes under UK and Australian law and would certainly attract substantial notice.

A visit from a possum

Our garden's a wasteland at the moment - mostly neglect, but also a number of plants have been eaten right down to the ground.  We think this fellow (and one or more companions/rivals) are the culprits for that:


So we borrowed a trap off a friend, and on Friday morning woke up to this: 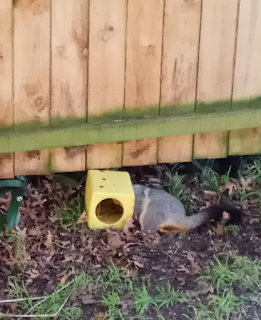