My disability isn't only a social construct

I keep on coming across comments like the following:


Disability is a social construct. It exists due to the society in which the person lives and not because of the impairment someone might have.

Such statements are kindly meant and are true to a point; but they greatly overstate their case and, in doing so, make me feel like a freak.  Yes, society can be structured in such a way that certain impairments cease to matter.  But in my case, no matter how the society around me was structured, my disabilities would exclude me from most of it.  By denying that reality, this statement about inclusion leaves me feeling seriously excluded.  If someone asserts my disability only exists because society hasn't accommodated it, yet I can think of no accommodations that could overcome my disability, what does that say?  That my disability is just in my own head and I need to get over myself?  Or that, even in the world of disability rights, no one has realised that people like me even exist?

Email ThisBlogThis!Share to TwitterShare to FacebookShare to Pinterest
Labels: CFS, CFS/ME, ME

Have I accumulated too many 'have tos'?

Recently I've been finding it really hard to fit everything I want to do into my schedule, and doing anything spontaneous has become well-nigh impossible.  Grump!  I think I know what the problem is and I'm one week into a trial to test my theory and see if I can improve things.

I think the heart of the issue is that I've accumulated too many 'have tos'.  I have too many regular activities, meaning that there's no space for anything else.  An easy mistake to make when you only have four hours a day to get everything done, but a highly problematic one!

What should I do about this?

In the first instance, I've come up with a fairly simple plan.  I've listed out all the things I do regularly and had a think about what I can stop doing.  My idea at this stage is to cut out as much as I can, with the expectation that I'll later add back in anything I'm really missing.   I've come up with an 'a list' of things that will be fairly easy to cut out and a 'b list' of things I could probably cut out if I had to.  The 'a list' basically consists of things that don't really need to be done, whereas the 'b list' has on it things that do need doing but could be done by someone else.  My hope is that I can fix my problem without increasing anyone else's workload, so for the moment I'm simply stopping my 'a list' things.  That should save me just over 15 minutes per day.

I started trialling this a week ago, with the expectation that I'll try it for 6 weeks and see how it goes.  One week in I'm hopeful :-)  It's hard to tell as it was a week in which I was uncommonly ill, but I really appreciated being free of the mental work of trying to fit everything in.  That was probably worth at least as much as the actual time saving.

In case you're interested, I've listed below my A and B lists of activities I could give up, as well as the full activity list.

Email ThisBlogThis!Share to TwitterShare to FacebookShare to Pinterest
Labels: CFS, CFS/ME, ME

A bit over a year ago I realised I found our bathroom rubbish bin rather ugly.  I decided to replace it with a colourful home-made papier mache one and started collecting supplies.  A few months ago I made a cardboard form and then started the actual papier mache maybe a month ago.  Yesterday it received its final coat of varnish and this morning I installed it in the bathroom.  That's a crazy amount of time to wait for an new rubbish bin, but I'm really pleased with the result :-) 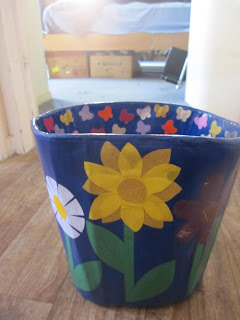