Showing posts from July, 2011
Show All

By Heather - July 22, 2011
This is my response to a comment I got by email after my recent post on prayer.  My friend said:
You say you pray for daily bread for people. I have struggled to understand how God - who loves us more than the sparrows and who promised to provide for all our needs, can let so many many people die of starvation every single day. Here was my response (unpolished and mostly off-the-cuff with my trademark never-ending sentences) in case anyone else has been wondering similar things.

Those are big questions, and ones that I have thought about a lot since getting sick. Not just in relation to myself, but also as I have realised that someone in my condition in at least 1/3 of the world would die of it because resources are so tight where they live.

My first answer is that God didn't want it to be this way. He made us a perfect world that was 'just right', and his plan was for us to always live in that world that was perfect. However, we/Adam and Eve stuffed it up and now there is …
Post a Comment
Read more

How do we as a church deal with this reality?

In the wider world, singleness is less of a problem (at least in part because singleness in the secular world is not equated with celibacy).  But in the church there is a clear understanding that you will progress from being a youth to a young adult to a young married to a young parent to being a parent of Christian youth.  (Curiously, the path seems to stop there!)

Heavy Heart to a Sense of Hope

By Heather - July 11, 2011
I really enjoyed this post last week from Alison Sampson in Australia.  She's reflecting on Jesus saying that God's burden is easy and his yoke is light (Matthew 11:25-30), and also on being part of a church.  She concludes with the realisation that the work to which God has called her, whilst distinctly unglamourous, is transforming her into God's image.  It's beautiful, and the whole blog is well worth a look, too.  She posts about once a week.
Post a Comment
Read more 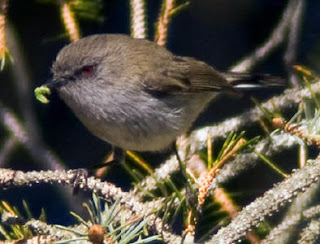 Image credit: Tiritiri Matangi open sanctuary
Many times every day at the moment I hear the song of the grey warbler.  Click on the link to hear a recording by National Radio or download the mp3.  This non-descript bird has the most amazing song, and I smile every time I hear it.
Post a Comment
Read more

At our church we have a slot in the service most weeks called 'Journeying with God'.  Anyone who wants can come forward and share something with the congregation at this time.  As I can't actually go to church, occasionally I record a little video to be played at this time.  Here is my latest one:

(I couldn't actually make the video work this time, but I also couldn't figure out how to put up audio on this blog, so this is an audio recording accompanied by a static picture of me sitting where I was when I made the recording.)
In it I share that I've never really prayed much for other people but recently I've realised that I need to, even though doing so doesn't really make sense to me.  As I've prayed I haven't seen it making a difference for the people I pray for but I have seen it make a real difference in me!  It's made me more involved in my community and more open to God prompting me to do things for the people I pray for, and it's r…
Post a Comment
Read more
More posts