Is there any point limiting one's personal carbon footprint?

I was recently asked what I thought of this:


...if you share my desperation and terror about this crisis, the urgent desire to do something, then limiting your personal carbon footprint should be very far from your main concern.  Like, it’s great if you can bike to work, and you should keep it up (fresh air and exercise and all).  But I’d say the anti-environmentalists are right that such voluntary steps are luxuries of the privileged, and will accordingly never add up to a hill of beans.  Let me go further: even to conceptualize this problem in terms of personal virtue and blame seems to me like a tragic mistake, one on which the environmentalists and their opponents colluded.

I think it's a really important question, so I thought I'd post my response here.

Currently New Zealand accepts 750 'quota refugees' every year - a number that hasn't increased since 1987.  That puts us at 90th in the world (per capita) for accepting refugees.

I'm increasingly seeing calls to increase this number, but those calls are often met by concern.  People worry whether this will increase unemployment in New Zealand, whether this influx will dilute our culture and even whether such refugees will bring the conflict they're fleeing with them.

That got me thinking: what proportion of those we grant residency to are actually refugees?  And who are the other people we let in?

Using data from pages 6-8 of the pdf in this file from the immigration department's website, I generated the following graph: 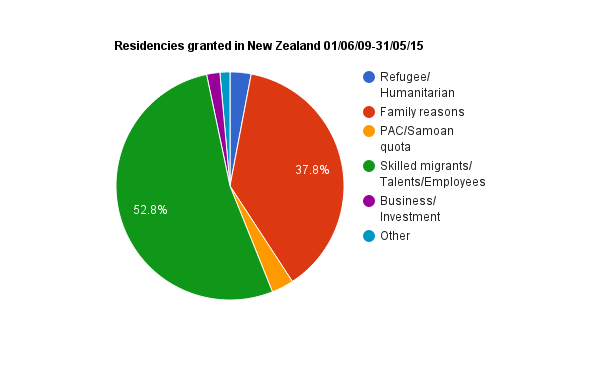 It turns out that people granted residency for refugee/humanitarian reasons are a tiny proportion of the total. Surely too tiny to have much impact on our culture or our job-market!  If we're concerned about the impacts immigrants have on those things, quota refugees aren't the problem.

If we'd like to basically retain the status quo, why not reduce the number of skilled migrants we bring in, rather than keeping the refugee quota static?  We could double the number of people accepted on humanitarian grounds to 6% without changing the total number of migrants: just offset them by reducing the number of skilled people we take in from 53% to 50% of the total.  I suspect that would hardly make a difference to the job-market, whilst having a huge impact on some very desperate people.

That still leaves the concern of whether more refugees will bring more conflict with them.  That's an understandable fear, but I think a largely groundless one.  I haven't looked into it, but I've rarely heard of conflict being introduced into New Zealand by refugees, so any increase would likely leave it at a very low level.

A good friend, Chris Joll, is an anthropologist working with Sufi Muslims in south and central Thailand.  In recent years he's begun documenting his work with amazing photographs that are now able to be seen on his website.

Over the last couple of weeks I've been browsing through the thousands of images he's uploaded.  I highly recommend doing the same, but if you don't have the time, I've posted my favourites below.  Click on the images to view bigger versions on Chris's website.