By Heather - May 21, 2017
Last October, I was given a moth orchid.  It was a gorgeous plant and I was delighted - but also a little daunted.  Orchids have a reputation for being fussy plants and I felt pretty sure I would kill it.  I had to keep reminding myself I was under no responsibility to keep it alive - I should just enjoy it for as long as I had it and leave it at that.


I was amazed by how long the flowers lasted.  I was given it on October 1st, at which time it had around 8-10 flower.  Maybe 5-6 more opened over the next couple of months and the last one didn't die until February!

I've been fertilising monthly for the last three months or so and being careful not to overwater it, but otherwise leaving it alone.  From time to time it puts up vertical roots - apparently this is normal behaviour as it's an epiphyte.

But then, a few weeks back, I noticed a really tall vertical root that was staying green.  Eventually it dawned on me - it was a new flower spike!  I was super-excited :-)  I've been diligently clipping it to the stake, adjusting the clips every few days to make it grow straight.

And then, a few days ago, I noticed it had formed heaps of buds :-) 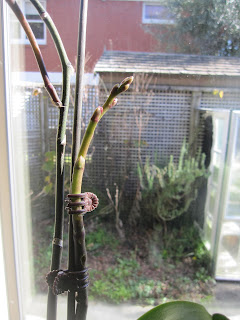 What's more, the original spike has grown a side-branch and that has buds, too! 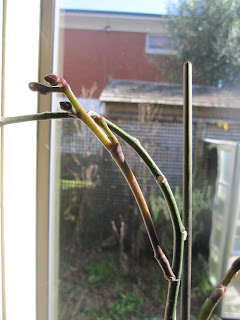 And, whilst there aren't any flowers to enjoy on the orchid, yet, I've had plenty of other flowers.  A friend brought me an enormous bunch just over two weeks ago.  Most have died, but this wee bunch of purple 'everlastings' remains.  I've put them in a vase without water and hopefully they'll stay good for a wee while. 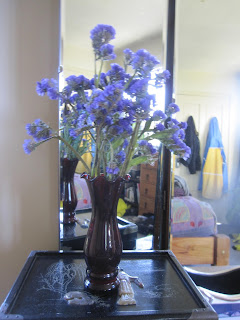 The vase came from my Grandma's estate - she collected red glass and I've inherited a few pieces from her collection.