A few weeks back, Martin and I got an unexpected insight into the lives of those super-rich 1%'ers.  They're us!  According to GlobalRichList.com, Martin's income is in the top 0.42% globally.  He's the 25 millionth richest person in the world!

The numbers are calculated on a 'purchasing power parity' basis - i.e. they try to account for what you can buy with that income based on what prices are where you live.  If we lived in Thailand, but Martin received the same income as he gets here, he'd be in the top 0.08% of income earners globally as the cost of living in Thailand is a lot lower than in New Zealand.

So, what's it like to be so rich?  To be honest, it feels quite modest to me.  Roughly a third of our income goes to taxes and donations, a third essentially to savings (that's 'Mortgage + Kiwisaver' on the graph) and we live on the remaining third. 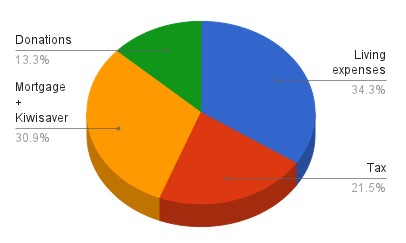 Our savings are targeted at being able to support ourselves in retirement at about the level of National Super and to own a 2-3 bedroom unit outright.  We're assuming that the government won't be giving us a pension as we don't think that rich people like ourselves should be relying on government support.

The amount that we live on (excluding our mortgage payments, Kiwisaver contributions and donations) is significantly less than the amount the government pays to retired couples who own their own home - although it is much more than we would get if Martin was unemployed and I was back on the sickness benefit.

I've come away from this exercise feeling subdued.  I've always known we were wealthy - after all, how many couples can live on only one income? - but I hadn't realised quite how far up the tree we are.  I'm stunned by how poor that means everyone else must be.

A little thing from the latest Grapevine magazine confirmed that impression:

If you've got food in your fridge, clothes on your back, a roof over your head and a place to sleep
... you are richer than 75% of the world.

If you have money in the bank, cash in your wallet, and spare change in a pocket somewhere
... you're among the top 8% of the world's wealthiest.


If you're reading this
... you're more fortunate than 3 billion people in the world who cannot read at all.