Commercial chocolate-making involves three further steps beyond a simple mixing of ingredients: refining, conching and tempering.  Since my previous post, I've been learning about the first of these.

'Refining' chocolate involves grinding the particles in the chocolate (including the fat globules) till they are so small that your tongue can't detect them.  Commercially, this is done using either roll refiners (forcing the chocolate up a series of stacked rollers not unlike the rollers in an old-fashioned wringer washing machine) or a ball mill.

On a domestic scale, the 'state of the art' solution is the Spectra 11 Melanger.  Investing in such an expensive piece of equipment seemed insane for my purposes, but it gave me a clue.  The Spectra 11 is a modified Indian wet grinder.  We already have an Indian wet grinder: a Sumeet.  It uses completely different technology, but is designed to do the same thing, so I thought I'd give it a go :-)

With a commercial refiner (or the Spectra 11), you typically leave the grinder to run for many hours - sometimes even days.  I didn't know how long I could leave the Sumeet running before it overheated but I knew that it had a reliable cut-out switch so I wasn't too worried.  I planted it in the sink (so it couldn't 'walk' anywhere), turned the tap away for safety, turned it on and quickly removed myself from the scene.  It's very loud! 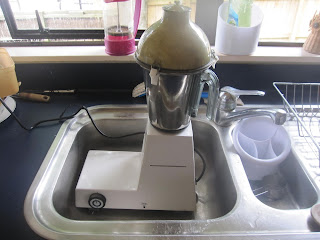 After 30 minutes I noticed a slight change in the smell, even from two rooms away, so I quickly turned it off.  The chocolate appeared to have caramelised ever-so-slightly, but it was also much, much smoother.  Very promising :-)  I later ground it for two increments of 10 minutes, allowing it to cool significantly in between.  It was yet more smooth after this, but not by much.  In the future I intend to grind it in 10 minute increments and keep going until I decide it's good enough (or that I've had enough of the noise). 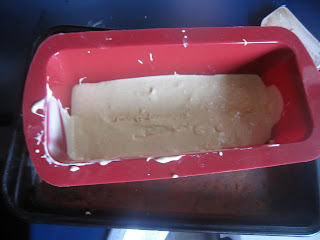 It seems that this grinder is much more vigorous than those normally used for chocolate.  This means it has more potential to burn the chocolate, but it seems it also means that it gets the job done much more quickly.

So, here's my recipe for 'refined' white chocolate.

80g cocoa butter
80g milk powder
1/3 cup (80g) white sugar
seeds of 2/3 a vanilla bean (can probably use 1 1/3 tsp vanilla essence if you will later be adding liquid to the chocolate, e.g. if making ganache or mousse).

Notes:
Some people have also used juicers or food processors but they generally don't get things fine enough.


Next I need to learn to 'conch' the chocolate.  In milk and dark chocolate, this step eliminates some of the bitter flavours in the chocolate.  However, it's also the point at which you add an emulsifier, so it's still important for white chocolate.  Emulsifying the chocolate further improves the texture and also makes it easier to temper.

I'll be using soy lecithin, the emulsifier most commonly used in chocolate.  It comes in both powder and liquid forms.  I've decided to use liquid lecithin as I think that will mix in better, and I've decided to buy it in capsules (rather than as a bottle of oil) as I think that will probably keep better.  I'll initially add 1% soy lecithin (which means my one bottle of capsules would do 50 batches!) and generally follow this advice.
By Heather - August 16, 2015