A friend of mine has a wee boy who turns three today.  It's the first birthday he's had where he's really been aware of what it's all about, so his mum wanted to have a proper party for him.  I volunteered to make the cake :-)

I had a blast doing it!  He's really into dinosaurs, and I was delighted to find these very straightforward instructions for making a dinosaur cake.  You make two round cakes, then cut one into an 'n' shape for the legs and body and the other into two hooks to make the head and tail [pdf]. 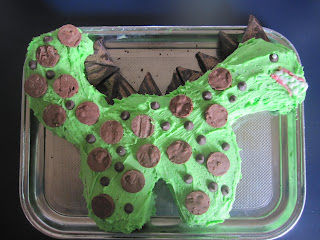 I'm really pleased with it!

For the cake I made two 20cm cakes using the chocolate cake in my Edmonds cookbook.  One of the children coming to the party eats gluten-free, so the cake that I used for the head and tail is gluten free.  We didn't have any commercial gluten-free flour mix in the house, so I ended up making my own with what we had to hand.  The cake came out really moist and not at all crumbly!  I was very pleasantly surprised.  For the record, the mix I used was:
It's loosely based on the mix on this website, but adjusted to only include things we usually have in the house.

The cake is iced with butter icing (a startling 1.1kg of it), also from Edmonds.  I was pleased to find out that Chelsea icing sugar (which we use as it's almost-certainly slave free) is gluten free so I didn't have to do anything complicated there.

I made the spikes from Whittakers Ghana Dark chocolate - melting it then letting it almost set before cutting it with a sharp knife.  The large spots are made of Whittakers Creamy Milk chocolate - again melted and allowed to almost set, but then stamped into circles using a pill bottle lid with a hole cut out of the top as a 'cookie cutter'.  The small spots are 55% chocolate drops, a fairly new product from TradeAid.  The dot on the eye, the lips and the teeth are all regular icing (i.e. water and icing sugar).

All that chocolate (including a cup of TradeAid cocoa between the two cakes) meant the cake wasn't exactly cheap: the ingredients came in at around $21.  However, if we couldn't have afforded that we could have made another kind of cake or used less chocolate in the decorations.  It wouldn't have seemed right to use ingredients that kids elsewhere were abused to make, just to make the kids at this party happy!

To go with the cake, I felt a dinosaur-themed present was called for.  I bought a dinosaur T-shirt and made a dinosaur card to go with it.  I didn't think it was worth specially buying dinosaur wrapping paper, though, so I made do with some animal-themed paper I already had. 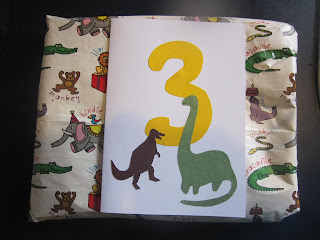 It seemed to meet with approval from the birthday boy :-) 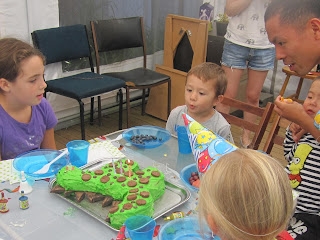