The wonders of bean water!

A friend recently drew my attention to 'aquafaba' (literally 'bean water') - the water you've cooked chickpeas or beans in.  It's kind of gelatinous, and someone figured out that you can use it just like egg white: it can even be beaten to stiff peaks!

When I heard that, I had to try it!  After all, we cook beans or chickpeas at least once every week and just throw the water away...

First up, I had a go at making vegan meringues. I used the Edmonds pavlova recipe, substituting 30mL 'aquafaba' for each egg white*, spooned it onto lined baking trays and baked it for about an hour and half at 120C.

* We cook chickpeas from dry, rather than using canned canned ones.  The water we get from doing that is quite thick - a lot like egg white.  Apparently the water from canned beans is thinner, so you either need to use twice as much or cook it down till it's as thick as egg white. 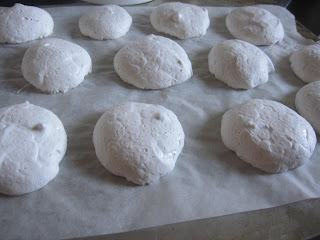 Just like with regular meringues, some of them stuck to the paper and wouldn't come off in one piece, but overall I was pretty pleased with them.  They tasted just the same as regular meringues, but with the bonus of cool circular patterns formed on the surface (no idea why). 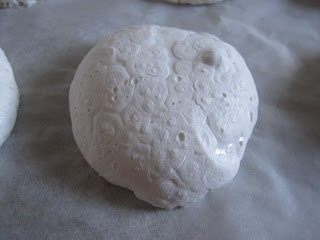 They say you can use aquafaba anywhere you'd use egg whites: people have used it in royal icing, lemon meringue pies and even mousse.  I'm hoping to have a go at using it in vegan marshmallows soon - we just need to get some agar, first, to replace the gelatine in my regular recipe.

Next, though, I decided to try using them in baking.  When I have excess egg whites, I often use two egg whites in place of a whole egg when making cakes etc.  Would aquafaba work as well?  Other people have used it in brownies, so I figured it was worth a try.  And so my 'rubbish cake' was born... 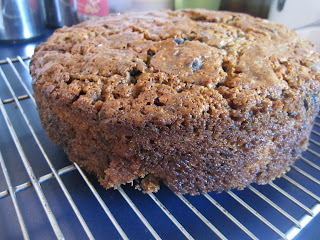 The banana peels didn't get cut all that finely in the food processor and I'd been worried that they'd been unpleasantly stringy.  As it turned out, they were just pleasantly chewy and the whole cake was moist and had a great banana flavour.  Yum!  Who would have thought that banana peels, bean cooking water and old milk could turn into something so that tasted so good? 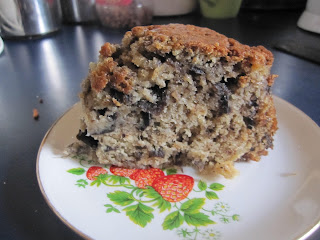