I've just finished a huge project: a rain poncho for Martin to wear whilst cycling :-) 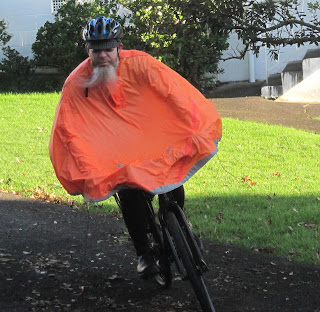 It was prompted by Project Glow Wear: a competition put on by the Greater Wellington Regional Council to encourage people to make clothing and accessories that include reflective elements.  They provided reflective fabric to all entrants (something I'd never even thought to investigate how to buy) which was definitely what tipped me over into deciding to enter.

It turned out to be an enormous project - even bigger than I expected - and it may well have been better if I'd given up at some point.  But I didn't, and now we have a cool poncho :-)

I didn't have a pattern of any kind so started with Martin, some photos of commercially available ponchos and a truly astonishing quantity of newspaper.  I expect there were easier ways of generating a pattern than what I did, but I know nothing about pattern design so just figured it out as I went along...


The body of the poncho is made from Martin's parents' old tent.  I've already used this in a couple of other projects, so it took a fair bit of work figuring out how to fit the pattern pieces onto the remaining fabric. 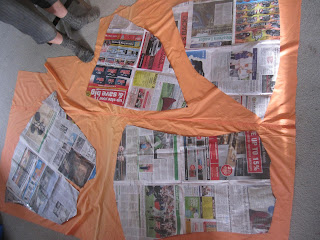 There'd been some debate as to whether the collar should be made from the orange fabric or the reflective material.  This step solved that one: we didn't have enough orange fabric to make the collar as well, so reflective it would be!  That's what Martin was arguing for, anyway :-)

All the actual sewing was then done by Martin's Aunty Elspeth when we visited her in Te Aroha, making her my co-entrant in the competition :-)  I'd thought that that would make for tidier seams and also save a lot of time.  I eventually realised that, whilst that was true, in actual fact without her help it simply wouldn't have been sewn together at all.  Most of the seams include reflective piping, meaning you need to sew simultaneously through two layers of the reflective fabric (which is quite heavy) and three layers of the orange fabric (which is thin woven plastic).  I simply don't have the physical strength to do that, so without her generous help there would have been no poncho.  Thank you Aunty Elspeth!  Thanks also to Martin's sister, Sandra, who finished off some of the machine sewing after we came back home :-)

I was delighted to find this really useful link on waterproofing seams (the fabric is all waterproof but that is, of course, compromised by all the needle holes in the seams).  It guided me towards using a product called 'Shoe Goo', mixed with acetone to make it easier to apply in multiple thin layers.

Two features of the poncho I'm particularly pleased with are the loops that attach it to the front of the bike: 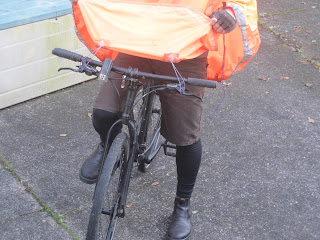 And the slits that enable Martin to punch his arms out in order to signal: 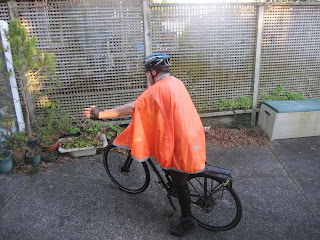 These slits have magnets in them so they snap closed when he brings his arm back in :-)

And, not really a feature, but I do love the stars scattered over the back and sides.

The reflective rectangle you can see on the back is a loop over which you can clip a rear light.  The front light may need to be a helmet-mounted one, although Martin is hoping he may be able to simply push the front of the poncho aside and use a normal handle bar-mounted front light. 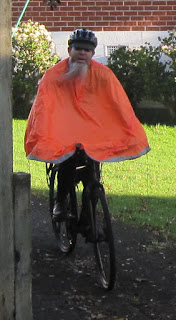 I'm super-stoked that the poncho is made almost entirely of recycled materials.  Except for the reflective fabric and the cord in the base and the handlebar loops (and, of course, the thread and waterproofing goo) it's all recycled!

It's not perfect (the arm slits could have done with being a bit longer, for example), but on the whole I'm very pleased with it! 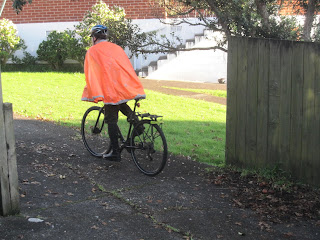 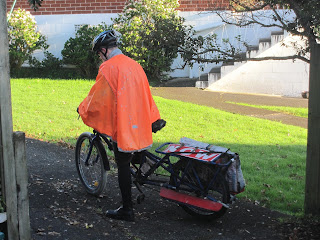 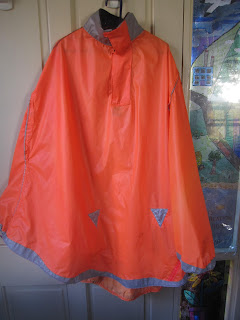 Tomorrow it heads off to Wellington for the competition.  Mostly I don't expect to come anywhere, but part of me is kind-of hopeful!  The only disadvantage of entering is that Martin basically won't have use of it until next winter, as we won't get it back till mid-October.

If you're reading this because you'd like to make a bicycle poncho yourself, please feel free to post any questions you have in the comments.  I'm happy to pass on what I've learned as best I can :-)
By Heather - June 29, 2017