So many good things to look at right now!

I'm loving all the flowers I have in my room at the moment:

Outside I've also been loving these hyacinths, although they're nearly finished now.   They have a delicious spicy scent - quite often I've sat next to them for a while or brought one of the pots up into my lap. 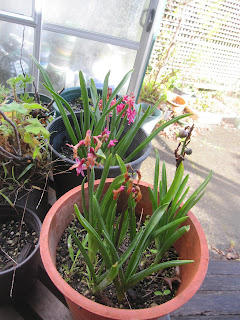 Aside from flowers, I've also been loving the webcams live streaming the antics of brown bears in Katmai National Park and Preserve in Alaska.

Yesterday morning I spotted this one having a snooze on a wee island just down from the waterfall where they fish.

Two or three times I've seen bald eagles soaring around the area (or one time, hopping from rock to rock whilst being quietly harrassed by a bear!).  On Wednesday for the first time I saw what I believe to be a grey wolf: 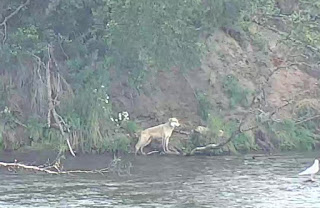 It looked so different, after so many weeks of watching bears: long and lean with really long legs, and so much more agile than a bear.  Apparently they sometimes fish for salmon in this area, too, although this one just trotted along the bank for a while before disappearing from view.

And then, every night I go to sleep enjoying the stars on the gorgeous star curtain Martin and his parents got for me last year (photo credit to Anna who has a camera that can actually capture their light!). 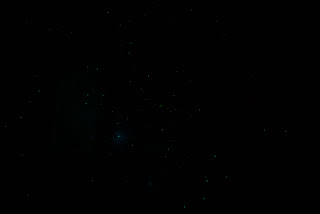