In recent weeks I've been feeling like God wants me to take new steps in being a 'living sacrifice', a term Paul used in his letter to the Roman Christians that we have recorded in the New Testament:


I appeal to you therefore, brothers and sisters, by the mercies of God, to present your bodies as a living sacrifice, holy and acceptable to God, which is your spiritual worship.  Do not be conformed to this world, but be transformed by the renewing of your minds, so that you may discern what is the will of God—what is good and acceptable and perfect.

I feel like God is calling me to be less conformed to the patterns of living I've settled into and to be more deliberate in living for him in terms of how I use my time.

There's been a number of threads to this.  I've mentioned earlier that I've joined with my church in trying to read the New Testament over July-December this year, and one of the first 'threads' came through that, when I read this:


Now a discussion about purification arose between John’s disciples and a Jew.  They came to John and said to him, “Rabbi, the one who was with you across the Jordan, to whom you testified, here he is baptizing, and all are going to him.”  John answered, “No one can receive anything except what has been given from heaven.  You yourselves are my witnesses that I said, ‘I am not the Messiah, but I have been sent ahead of him.’  He who has the bride is the bridegroom. The friend of the bridegroom, who stands and hears him, rejoices greatly at the bridegroom’s voice. For this reason my joy has been fulfilled.  He must increase, but I must decrease.”

The bit I've put in bold is what stood out to me: "He must increase, but I must decrease".

As I was pondering this, I came across this blog post reflecting on Augustine's idea of making one's life a 'living prayer'.  Kelly Dombrowski talked about how her life is full of a myriad of tiny details and how fretting her way through them generally feels like anything but a 'living prayer'.  Recently she has tried to go through her day doing one thing at a time; not fretting about the next thing but simply focusing on the task at hand and trying to let go of any thoughts that come to distract her as she does it.  That is her living prayer: to trust that she can get done what needs to be done and to rest in God as she offers each one to him.

Since reading that I, too, have been trying to do one thing at a time.  I have very little time each day as so much must be spent resting, so I often find myself trying to economise: often finding myself listening to something with half an ear whilst reading something with half an eye, trying to get through more with the time and energy available.  But now I'm trying to only read or only listen (although I still have audio on whilst doing more mindless things).  And, most especially, I'm trying to take resting more seriously.  Five times a day I do a 15 minute 'special rest' when I am supposed to do absolutely nothing: no listening to the radio, no playing solitaire or browsing the internet, no looking out the window even.  Except quite often this deteriorates to the point where all that happens is I set my timer and turn the radio off for 15 minutes, but otherwise continue with whatever I was doing before.  So I'm working hard on resting properly and making that my offering to God.  Doing what I want is 'decreasing' in order to increase the space in my life given over to trusting God.

Another strand came from a prayer book I've mentioned before, the Valley of Vision.  The other day I opened it for the first time in a while and came across this (click on the image to make it big enough to read): 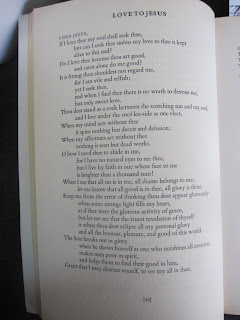 I was particularly struck by this bit:


"when my affections act without thee, nothing is seen but dead works".

What, indeed, is the point in always doing 'stuff' (even very worthwhile stuff) if my focus isn't on God and what he's calling me to?

This bit also hit me:


"but let me see that the truest revelation of thyself
is when thou dost eclipse all my personal glory
and all the honour, pleasure and good of this world."

Two further things from my New Testament reading have also fed into this.

Firstly, the story of the man born blind (John 9:1-12).  Here, Jesus' disciples asked whether the man was born blind because of his own sin or that of his parents.  Jesus replies:


"Neither this man nor his parents sinned; he was born blind so that God’s works might be revealed in him".

That sounds kind of harsh: to say that he had suffered his whole life 'just' so that God could now be glorified by his healing.  And yet, we were only created to glorify (and enjoy) God, so why not?

And then there's the story of Lazarus (John 11:1-44).  Jesus tells his disciples that he was glad he wasn't there when Lazarus was sick, because Jesus showing up after his death meant that the disciples would 'believe' (v. 15).  And then, in front of the tomb, we are told that:


Jesus looked upward and said, “Father, I thank you for having heard me. I knew that you always hear me, but I have said this for the sake of the crowd standing here, so that they may believe that you sent me.”  When he had said this, he cried with a loud voice, “Lazarus, come out!”

Lazarus was allowed to die, and his sisters to suffer considerable grief, so that Jesus' disciples and those who were mourning for Lazarus would be shown that Jesus was sent by God.  God judged that 'learning experience' as being simply more important than the suffering it also caused.

Alongside my illness itself being a form of suffering I live with, these changes I'm making do also feel a bit like a kind of suffering - they do consist, in small measure, of 'denying myself', after all.  And I think that that's OK.  I recently read some reflections by Nesmy Bersot Mvé Nguéma, a staff worker with the Christian university student group GBU in Gabon.  He shared that:


The lesson I have learned is that I have to suffer in my body and in my soul because of my faith. If my life becomes too peaceful, I better do a quick check-up to ensure that I have not compromised with the enemy unintentionally or that I have not created a comfort zone.

He said that in a context where he is not infrequently fearing for his life, but he is convinced it applies to all Christians, not just those suffering persecution.   I think he is right and that this is something God is trying to deepen my understanding of at the moment.  And now, alongside praying that it will be taken away, I have also occasionally begun to ask that God will be glorified through it.

So there's the strands of what I've been thinking about.

In practical terms all this hasn't led to much, to be honest.  Mostly it just means that I'm trying to focus on doing one thing at a time and on resting properly.  I did also stop reading a book I was enjoying because I felt 'yucky' about it (I don't have a better way of saying it than that!).  It took a while (and felt like quite a big sacrifice at the time!), but I eventually acknowledged that feeling meant that God didn't want me exposing myself to the stuff in it and stopped.

Also, even if I've recently been thinking a fair bit off and on about sacrifice and denying myself, I'm conscious that what I'm really doing isn't seeking suffering but seeking God.  Which really means that I'm on a path to contentment, not deprivation, as in the end, after all, "only God can fill me".
By Heather - September 23, 2017