Some cool things I've been watching

I'm continuing to enjoy spending a lot of time watching the bear cam: it's such an amazing opportunity to be able to watch what's going on all the way over in Alaska in real time!

There aren't many salmon jumping any more and the bear numbers have definitely thinned out.  The bears that remain are super-fat: it's delightful to watch the way their bellies roll when they shake themselves!  However, I seem to be noticing more other species there now.   This morning I spent about half an hour watching this amazing bald eagle.

The picture below catches most of the wildlife I'm commonly seeing.  There's also some kind of duck or grebe I see a lot of, but in this picture you can see a bear in the foreground, a bunch of gulls I think are mew gulls, one glaucous-winged gull slightly to the right of centre, a bald eagle on the slope and several black-billed magpies scattered around.  There's even a magpie on the bear's back.  Do click the link for the magpies at least - my photo doesn't begin to do them justice.  They have amazing irridescent feathers and cool patterns on their wings in flight.  I see them flitting around the falls a lot and have come to love watching them. 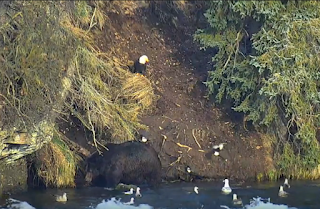 But the bears do remain the stars of the show.  These two (big) cubs were neat to watch as they had a wee snooze earlier today. 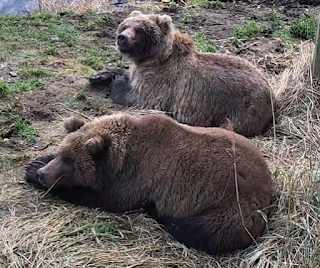 And, away from the webcam, there's been some fun things to gaze at in the real world, too.