Straight after Christmas, Martin and I headed down for two weeks holiday in Wellington :-)

We were really pleased to discover that the airline allows disabled people to bring two mobility aids with them (not one as we previously thought), so I was able to bring my walker as well as my wheelchair.  We also worked out we could just fit my 'travel' bed lever and my brand new 'travel' shower stool into the standard baggage allowance, so they came along in a custom-built cardboard box Anna and Martin put together.  It all added up to a stupendous amount of stuff, but it was very nice not to have the hassle and expense of hiring everything down there :-)


The flight down went pretty smoothly, and we found a really nice quiet spot to rest up and recover at Wellington Airport. 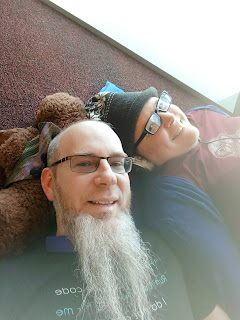 The first week in Wellington was spent at a beautiful AirBnB in Porirua with Martin's whanau.


We also managed a swim near Paremata Bridge, just down the road from where we were staying. 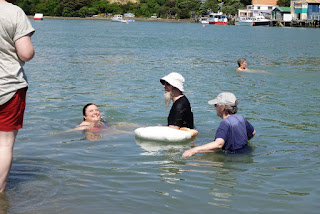 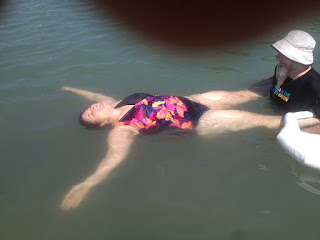 After the week in Porirua, Martin and I headed across to Upper Hutt to stay with our friends Louise and Barry.

I really enjoyed spending time with their kids - Alec (9) and Ronan (7).  We played lego with them and introduced them to Qwirkle.  They spent a lot of time quizzing me on life in the "olden-days", which tickled me inordinately :-)


They live near a lovely patch of bush which, unfortunately, was too rough for me to access.  Louise really wanted to share it with me as she knew I'd love it, so she took the time to video a 10-minute walk-through of it for me.  I was super-touched by that kindness and did, indeed, very much enjoy getting a bit of a feel of what it's like.

After five days with them we headed off to visit Beth, who lives high up in Aro Valley.

Getting there was pretty impressive.  At one point I checked with the taxi driver that the steep one-lane roads we were traveling on really were two-way, but he assured me they were.  I was glad we didn't meet any oncoming traffic!

Beth's place is well down from the road, clinging to a steep hill.  It's accessed by a nifty cable car which I greatly enjoyed.

Her house is really lovely: three small storeys looking out over heaps of bush.  Best of all, she lives really close to Zealandia (as the kaka flies - it's not so close by road), so is visited by zillions of kaka every day!


After two days with Beth we headed home. The flight back was pretty rough.  You can't use the self-service check-in if you're traveling with a wheelchair, so we had to wait ages for a check-in person, who then transpired to not really seem to know her job very well.  Everything took ages and involved lots of seemingly unnecessary questions.  Then security in Wellington wanted to know if I could walk through the scanner (rather than be patted down), but didn't tell me that grabbing onto the sides of the scanner stopped it working.  So I made the significant effort to walk through, supporting myself on the sides, only to trigger lots of noise and flashing lights.  Then they said they'd need to get someone to pat me down, but didn't bring me my chair even when I told them I was going to fall over, leaving me standing grabbing onto a ledge nearby.  Fortunately the wheelchair wasn't too far away.  When it was clear no one was going to help but I really was going to fall if I didn't sit down, I kind of threw myself at it, landing pretty awkwardly.  So that was all pretty horrible.  Then we had to wait ages for a pat-down person to arrive.  After all that there wasn't any time left to rest at the gate before we got on the plane.  The plane was fully-booked so I couldn't half-lie-down on the plane as I had coming down, so all-in-all I was sitting mostly upright for maybe three hours - way beyond my normal limit :-(  And, to top things off, we couldn't find a quiet place to rest at Auckland airport so, whilst I did get to lie down for an hour or so, it wasn't as restorative as hoped.

We had arrived in Wellington much tireder than would be ideal, so we had had to scale back our expectations of what we did there (i.e. we didn't catch up with anyone other than my relatives and the people we stayed with, and we only had the one outing rather than the 2-3 I'd hoped for), but it was still really lovely to spend time with all the people we did see, and the kaka at Beth's were a definite added bonus :-)

All up, the trip emitted about 610kg of CO2e into the atmosphere (for context, the planet can absorb about double that per person per year, so we each burned a quarter of our annual 'allowance' in just two weeks!).  Nearly two thirds of that was the flights (390kg CO2e), with the remainder caused by:
Definitely not something we can 'afford' to do every year, but a very enjoyable occasional indulgence :-)

It's nice to be back in our own space after two months away (6 weeks with my parents then these two in Wellington).  I've been enjoying watching silvereyes and even blackbirds and thrushes gorge themselves on the elderberries outside my window.


And yesterday I saw the first Jerusalem artichoke flower. 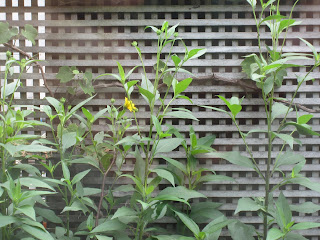