Over the last year or two I've been working on a recipe for home-made Nutella.  I don't want to buy regular Nutella as it's made with cocoa bought on the open-market, some of which will have been grown by slaves.  I want my global neighbours to flourish, so try to always buy fairly traded cocoa.  However, I still want to have a chocolate hazelnut spread in the house as one of our regular visitors is very attached to it, and hospitality is important, too!  Having failed to find any fairly traded chocolate hazelnut spread in New Zealand*, it was time to figure out how to make my own :-)

*if you're in Australia and have this problem, try this: it's yummy, widely available and not even that expensive! 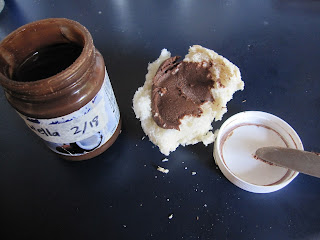 It took a bit of figuring out, but here is my recipe.  All you need to make it is a blender and a set of scales.  Below the recipe I've put some notes about the process I used to develop it :-)

Place all the wet ingredients in a blender and mix well.  Add in the soy lecithin at this step - cut into the capsules with a sharp knife and squeeze the contents into your blender.
Sift in the dry ingredients (if you have an old-fashioned sifter you may well find you can simply sit it in the top of the blender and sift in directly) then mix well again.  You may need to scrape the blender jar down with a spatula once or twice to make sure it's all mixed in.

Store in the fridge.  Unlike commercial Nutella, this spread has both oil and water in it (not just oil), making it more perishable.  In the fridge it should keep fine for at least four months.

On the internet, I found many recipes for Nutella-subsitutes.  However, they were generally trying to make something noticeably different from commercial Nutella: a lower-sugar version, perhaps, or one that tasted more hazelnutty.  In contrast, I wanted something as close to the original as possible.  I did find a few that claimed to be mimicking actual Nutella, but I wasn't convinced by the results.

It was time to turn to Nutella packaging: how much of their actual recipe could I figure out from what they have to disclose?

From the ingredients list we find that it's made of:

So that tells us what 29.5% of the contents are already!

I'll assume the lecithin is 1% and the vanillin is 0.5%, as those are both things that are usually present in tiny quantities.   That leaves sugar and palm oil to make up the remaining 69%.

Looking at the nutritional information on the packet, 100g nutella contains 58g sugars.  Some of that will be lactose from the skim milk, with the balance being actual sugar (hazelnuts and cocoa are both very low sugar).

If sugar and palm oil make up 69% and just sugar is 53%, that means palm oil must be 16%.  So, I suspect the commercial Nutella is composed of something like:

I don't have access to refined palm oil, so I used canola in my recipe - it's similarly flavourless and I have it in the cupboard, although it is more 'runny' so the consistency won't be quite the same.

Also, I've learned that adding skim milk powder directly to oily spreads is a bad idea: it's just too grainy, even if I try to grind it finely.  I decided to use sweetened condensed milk instead.  Ordinarily the water in the sweetened condensed milk wouldn't blend properly into such an oily spread but the soy lecithin - which is present in the original to increase creaminess - will emulsify them fine.

In order to make as smooth a paste as possible I used icing sugar for the sugar and commercial hazelnut butter rather than home-ground hazelnuts.

And, rather than vanillin, I used vanilla essence, of which vanillin is the main flavour component.

That means I need to make a mix that is:
In test batches, I found this was a bit stiff straight from the fridge; in the final recipe I added a little extra water to make it more spreadable.  If you don't do this, you'll need to microwave your spread for a few seconds before use.
By Heather - February 16, 2018