A bit of an update

Life is a bit of a rollercoaster at the moment.  I'm doing way more than I used to and I'm so enjoying having so much more people contact and so much more independence.  So many things that I used to find hard are easy now.  For all that I do a lot of sewing, I've always hated cutting projects out - the concentration was really difficult and I was always battling through so much pain as I leaned on weird angles to do it.  But last Tuesday I had a project to cut out and it was so unexpectedly relaxing and kind-of meditative that I ended up cutting out my next project immediately after as well!  I'm also ever-so-much less sensitive to noise, light, sounds and smells, which is awfully convenient :-)


But I also really struggle to read my body, meaning I'm having far more 'crashes' than before.  For example, yesterday at church I was talking to someone when I started to feel weirdly disembodied and then rapidly became very dizzy.  I ended up finishing the conversation lying on the floor!  Last Tuesday I went for a walk with Martin and found my left leg swinging out at odd angles as we were walking back up our driveway.  We had to rest leaning on the driveway fence then again sitting on the neighbours' lawn before we were able to get back home.  On New Year's Eve we went into town to explore the Wynyard Quarter.   We had a lovely day, but a few hundred metres before we got to Martin's work (where we intended to rest before going home) my calf muscles suddenly became very sore.  Not many steps later they more or less completely stopped working and I had to take several rests before we got to Martin's work.  And many evenings have ended with me feeling exhausted and miserable and being so over-tired it's hard to get to sleep.


So this healing lark is overall good, but there's a lot to learn!

I still haven't got used to not having the walker - not as a walking aid, but as a useful platform.  I can't carry as much without it and I keep on reaching to put things on it and finding it's not there!

I've been tracking my progress in terms of number of steps I take per day, how many hours I'm out of bed and my morning/resting heart rate.
So I clearly a lot more active than before, although still a lot less than a 'normal' person.

A few highlights of what I've been up to with all this new energy...

As mentioned earlier, on New Year's Eve Martin and I went in to town to realise a long-held dream to explore the Wynyard Quarter development around the waterfront.  We caught the bus into Silo Park (which I managed much better than last time), but unfortunately the Park itself was closed for a music festival.  I was surprised to see the wind tree sculpture that used to be in QE2 square right near our bus stop.  We wandered along the waterfront, where I had another surprise: I had no idea Auckland offered scenic sea plane flights.  It was fun to watch one take off, although they're awfully slow on the water and the floats underneath make them look very un-aerodynamic! 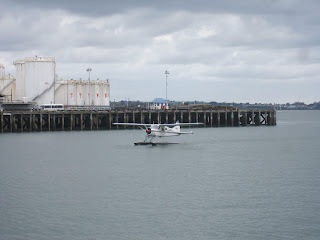 We had come prepared with both a mat and a folding stool for me to rest on so, whilst we didn't have anything like the amount of kit I usually travel with, we still weren't traveling light.


After our rest we wandered back towards the Te Wero bridge, where there was lots to see and do.

There were heaps of food trucks near the bridge.  We had a slice of cheesecake, followed by a hangi pack then some hot chips.  Yum :-)


After our late lunch we wombled slowly to the bottom of Queen Street.  There was a lot of construction noise there and I was glad of my headphones.  Martin works near the bottom of Queen Street so we popped into his office for a rest.  It was nice to finally see his work, plus Martin enjoyed the opportunity to play the arcade game (!) he's usually too busy working to enjoy. 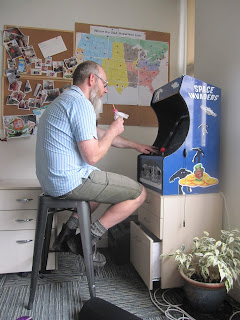 Later that week we (belatedly) celebrated my mum's birthday with a picnic in Heron Park. 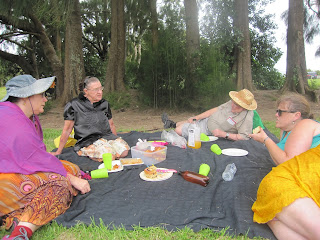 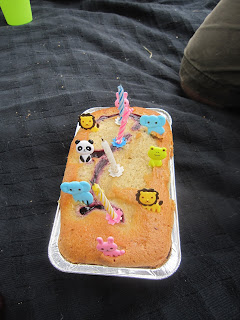 This past week Martin's been back at work, but I've continued with the socialising.  I've enjoyed getting to know Sarah's niece Emma, who will be staying with us off and on through January before moving into a flat at Unitec where she'll be studying this year.  I've also had visits from two friends who usually live overseas.  Firstly Nic andKirstyn from high school, (Nic was visiting from Scotland); then Claire from university (who lives in Townsville), with her partner and two boys.  I ended up taking both lots of visitors to Oakley Creek, which was fun.  It was neat to go there two days in a row, and I feel hopeful that one day I might know get to know the Creek as well as I used to know Mt. Wellington :-) 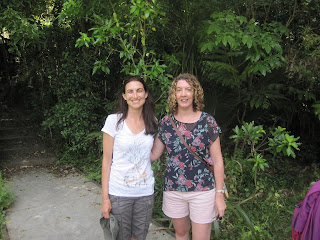 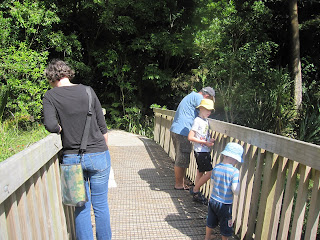 This week I'll take things more gently as I'm definitely a bit on the tired side, but all the activity has been fun :-)
By Heather - January 14, 2019

Email ThisBlogThis!Share to TwitterShare to FacebookShare to Pinterest
Labels: CFS, CFS/ME, ME, recovery