I've nailed a new Easter egg recipe.  After ludicrously extensive experimentation, I bring you: vegan marshmallow Easter eggs!  Read on to learn why, or click here to jump through to the recipe. 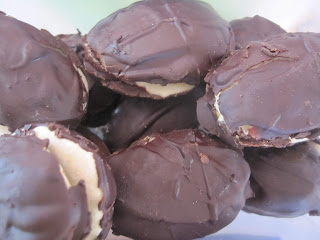 This is part of an ongoing quest to love our neighbours as ourselves.  Working conditions in the cocoa industry are terrible and child labour is common.  We want to love our neighbours in far-off cocoa-growing regions by ensuring they have what they need to flourish: a living wage, safe working conditions and, if they're kids, the opportunity to go to school.  But we also want to love our nearby neighbours by showing them hospitality.  For our vegan neighbours at Easter, that means hand-making vegan Easter eggs using fairly traded chocolate, as vegan fairly traded Easter eggs are otherwise very hard to come by.

I figured out vegan peppermint creme eggs some years back but I've been keen to expand my repertoire - and the chemist in me has enjoyed the challenge of figuring out how to make vegan marshmallows at home :-)

My regular marshmallow Easter eggs contain two non-vegan ingredients in the actual marshmallow: gelatine and egg white.  For the vegan ones, the gelatine has been replaced with agar agar (which gets boiled in with the sugar as it doesn't work unless you boil it for a bit) and the egg white with aquafaba (chickpea cooking water).  Various proportions needed changing to get a good texture, although the clincher was changing the cooking method.  Instead of beating the sugar/agar agar mix then folding in beaten aquafaba, the sugar mix is drizzled onto beaten aquafaba with continuous beating.  I'm not sure why that makes such a difference, but it led to a vastly fluffier product :-)  The idea for that came from here.

The butter in the 'yolks' is replaced with 1:1:3 water:olive oil:coconut oil (with thanks to The Ice Cream eBook for teaching me that a 1:3 mix of olive oil:coconut oil gives a similar texture to milk fat).  The milk chocolate coating is replaced with Whittakers Dark Ghana chocolate, which is both vegan and Fairtrade (although, bizarrely, only Fairtrade in the 250g blocks - all other shapes and sizes of Whittakers Dark Ghana are mass market cocoa).

So, on to the eggs :-)
Gives approx 24-25 eggs.  They will keep 1 week at room temperature, 1 month in the fridge, indefinitely in the freezer.  NOTE: vegan marshmallow absorbs water over time.  It's important to chocolate-coat the half-eggs within a day or two - if you leave them longer the extra water will have make them fragile and handling them will destroy their structure.


Here are some photos of the process: