By Heather - June 19, 2019
It's been a while since I wrote anything here. Life has been quite busy and there hasn't been much time to reflect - which, on the whole, I don't think is ideal! I've been particularly busy with the Just Kai stuff. It's still small-scale really, but Just Kai does seem to be taking off: more than a quarter of the people who are now following that on Facebook are people I don't know, plus I've recently been asked to speak at a friend's church and to figure out Just-Kai-compliant catering for a conference next year :-)

But it's been busier than I really want, so I've decided to take this week and next 'off'. I'm not going to be generating any more Just Kai information (although I did answer one query that turned into a blog post over there) - instead, I'll be catching up on myself a bit and resting :-)

I'm still struggling to manage my energy these days and have 'crashed' twice so far this week. I kept things a lot quieter today and hopefully that will help!

It hasn't all been hard work, though. On the 9th Martin and I went out for dinner for his birthday - something we've never done before! The only other time we've been out for dinner since we first started dating was for fondue in Vancouver in 2003... It was lovely to be out together. We went to a Turkish place in New Lynn. 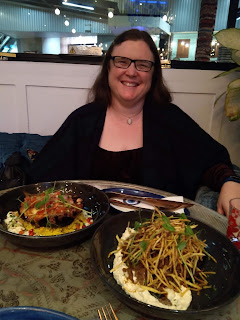 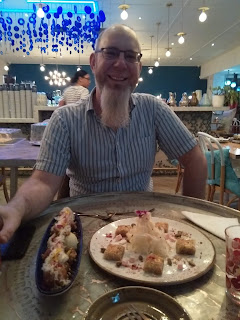 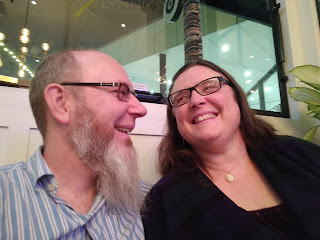 Then last Saturday we biked to Anna’s (which was slightly further than I’d realised, so actually my longest bike ride yet), then walked to a cafe near her place for lunch. It was really fun. I enjoyed trying the different things (we all shared meals so we got to try three mains and three desserts) and it was relaxed and nice. Then we walked back, rested for a bit and biked home. Biking home was hard - I was really struggling by the end, to the point of being nauseous and having to have Martin talk me through intersections etc - so it was probably more than I could really cope with, but we survived! 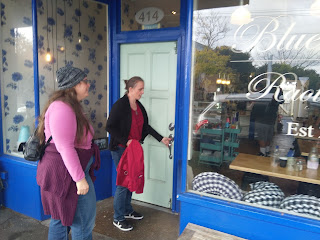 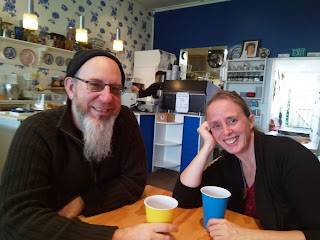 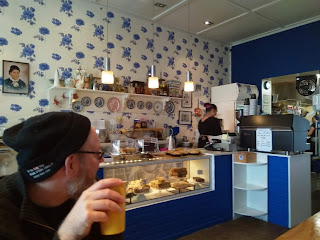 On Sunday Martin picked up a new bike for me that he'd found on TradeMe. It's essentially brand new, having been ridden only twice, and a definite step up from the random bike I've been on thus far. As our two elderly neighbours commented, it's a 'proper lady's bike' :-) 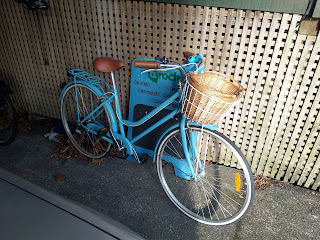 All the soft toy people fit comfortably in its basket :-) 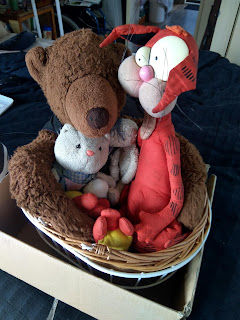 I rode it along the shared path yesterday, and got so many smiles and cheerful greetings :-)  I’ve ridden that route at more-or-less that time quite a few times and that hasn't happened before: I think the new bike makes me seem more approachable :-)


I’m getting stronger and fitter and learning lots of things, but it still feels like there's a lot to learn. At the moment I'm working on trying to get off the bike so that my right foot is on the pedal and near the top of the pedal's arc, so I'm basically ready to get going again as soon as I stop. I just don't seem to be able to figure that out. But I've figured out plenty of other things, so we'll get there!
I’m enjoying the violin.  I’ve now got two pieces I can satisfyingly just play and two more I’m working on.


I've realised there is no longer enough quiet in my day though - and, bizarrely, that I'm probably getting a bit less sun than back when I was sick! On cycling days I'm usually cycling before the sun is that strong, plus I'm generally not out a full half hour; then on days when I neither cycle nor walk I often forget to go out. So I'm working on both of these by trying to spend half an hour sitting in the sun reading on days other than those when I go for a long walk. I've been enjoying that.

I'm also continuing to enjoy Oakley Creek, where I walk if I don't have anywhere in particular to walk to. There's one spot where you look down on some pungas, and I love the way they have purple morning glory flowers winding through them, even though I know it can't be good for them! 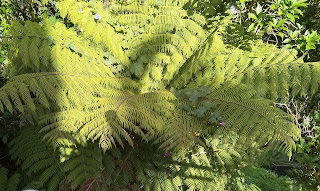