I did it!!!! Fair Trade white chocolate

As mentioned earlier, no one sells fair trade white chocolate in New Zealand.  Piko Wholefoods in Christchurch have, however, recently started selling fair trade cocoa butter.  My friend Anna bought some for me on a recent trip down there and on the weekend she came over to help me figure out how to turn it into white chocolate.

We didn't have a recipe to go on, so I decided to simply use 1:1:1 cocoa butter:milk powder:sugar - looking at the ingredients of Cadbury Dream white chocolate it seems that's more or less what they do.  The amount of vanilla was the same as what I used for the coconut butter white chocolate.

It worked really well!  It's not quite as smooth as the commercial stuff, but the flavour's pretty much perfect :-)  And, so long as you have a microwave and an electric spice grinder it's very easy to do.  It even works out at a similar price to non-fair trade white chocolate from the supermarket at around $1.60 per 100g. 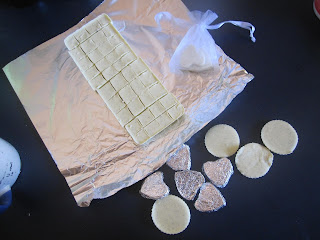 Below are some photos of the process.

I've now got a fair trade white chocolate that's plenty good enough for me.  All I need to do, now, is figure out how to make a decent nutella substitute and there won't be any non-fair trade cocoa products I actually want that I'll have to do without :-)  I do still have two outstanding questions about the process, though:

Update: see discussion on these questions in the comments, below.
By Heather - July 01, 2015