Spring is so early this year!

I've been very surprised by how early spring is this year.

Last year in autumn after it lost all its leaves I cut back my bleeding heart vine till it was just a few sticks poking above the soil.  It then sat dormant for a few months before putting up its first shoot.  This year, before all the leaves were even dead, I was startled to see new shoots appear!  I thought the plant was just confused and cut them back along with the rest of the plant.  New ones replaced them immediately.  I figured that meant the plant knew what it was doing, so I left them be and watered them.  Now, with theoretically another whole month of winter still to go, it looks like this. 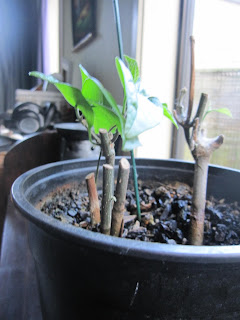 The next thing I noticed was our local grey warbler singing its heart out.  My bird book tells me that they sing occasionally year round, but mostly in September and October.  It's only July, but it's been singing solidly for at least a week!

And then there's my hyacinths.  These sit in a pot tucked away in a corner for most of the year and are only brought out when they start to sprout.  I have a reminder in my calendar for when to start looking for the sprouts - if I miss them, something has a tendency to eat all the flower-buds before they open.  That reminder is set up for August 1st: a month earlier than I've ever previously noticed them sprouting.  On Friday, though, I saw some pink flowers out of the corner of my eye: my hyacinths hadn't just sprouted, half of them were already flowering!  They must have come up a good 6 weeks early.  Fortunately, whatever it is that likes to eat the flower buds hadn't got to them (maybe it's still too early?) so it looks like I'll still get a good show of flowers :-) 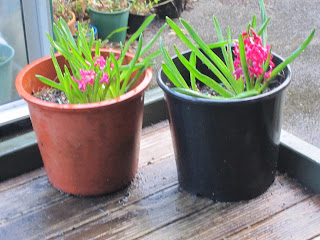