Martin and I took the weekend 'off' this weekend to just hang out with each other with no 'have tos'.  It was lovely, although I'm pretty knackered this morning!

We had lots of yummy food to nibble on through the weekend.  Martin bought French cheeses, salami, macarons, canelés and tarts from Pyrénées, the French deli in Mt. Albert, and I made a Zopf.  I'm still so happy that we bought a beater with a dough hook some years ago - it's lovely to be able to make bread without my weakness getting in the way :-)


On Sunday we went on an outing on the wheelchair bike - the first time we've used it for ages.  We did a giant loop around Gt. North Road/Blockhouse Bay Rd., with half our route being off-road on the Waterview Shared Path.  The shared path is fairly new and was really nicely done, including heaps of planting that's pretty small now but will be lovely when it grows a bit.

There were lots of birds along the path, including small flocks of goldfinches and the occasional swooping welcome swallow :-)  There were also lots of flowers - including these daisies, which were I figured were weeds so OK to souvenir!

Through the weekend I greatly enjoyed listening to the audiobook of John, a novel by Niall Williams.  It tells the story of Jesus' disciple John, who wrote a chunk of the Bible's New Testament including the book of Revelation, from the point of view of various of his contemporaries at the end of his life.  It was striking how contested the story of Jesus was at that time - John was arguing for Jesus being God in a context where other people were arguing Lazarus was God, or that John the Baptist was, or even that none of them were - and, of course, many other people were arguing (literally in the public square) for entirely different versions of ultimate reality as well.  A difficult time, beautifully evoked.

And off and on through the weekend I checked in on the bears - especially delighting in the one at the top of the image below.  He's bear 812 (they all have three-digit numbers given to them by rangers), a subadult born in 2015, who just can't keep still.  Whenever he's fishing he's constantly kicking his front legs out like he's doing here.  On Friday he got so enthusiastic he fell off the wee waterfall, but didn't seem much bothered and quickly trotted around and back to the top again :-) 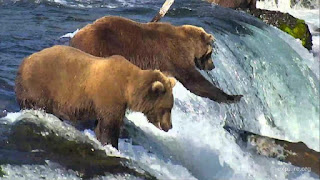