I feel like I've got a whole new life now.  I still get tired (and am still actually resting a great deal of the time), but it's a different quality of tired: and when I'm tired I can still move and think astonishingly easily.  Only once in the last three weeks has Martin carried me anywhere, and that was more because I was overwrought and overwhelmed and wanted something familiar than because of physical need.  A few other times I've felt really done-in and have considered asking him, but each of those times I tried it myself first, and each time it was vastly easier than expected.

But that's the thing.  All my expectations are wrong.  All my habits are needing to change.  I keep going to put something down on the walker and it's not there; I keep assuming I can't do things and then finding that I can.  It's good, but it's also awfully disconcerting.

On Friday a week ago, people came to collect my shower stool and walker.  They've just been sitting on the spare bed upstairs for a few weeks: I clearly don't need them so it's best they go to someone who does.  And yet, as they were taken away, I found myself crying - really hard-out crying.

I couldn't work out why, at first.  But I think it was this: those men were (symbolically) taking my life away.

It's not like it's been an easy life.  It's been so hard I've fairly frequently wished I could stop existing.  But, all the same it's been my life - and one that, by the grace of God, Martin and I have been able to live well.  I've been proud of the way we've done that.  I've also thought it bore important witness to the power of God.

I've long had a dream that Martin and I could go together to one of the places in the world where people with disabilities aren't treated with much respect.  That's the case in many places without a Christian heritage - even rich ones like Japan.  We could live somewhere like Japan maybe, me with significant disabilities and Martin healthy, and in our interactions show people something of the character of God.  People here have often commented they see something of God in the way we have faced my illness together.  Someone commented just the other day that our wedding was the most meaningful one they have been to because of it's testimony to love in the face of sickness.  I dreamed of taking that witness to somewhere where God isn't much known, and showing people something of who he is as we lived out our ordinary lives amongst them.

Suddenly getting well is a good thing, but it also looks likely to involve saying goodbye to that dream.  That's hard even though I'm well aware of the irony of being sad that God healing me has taken away an opportunity to bear witness to his goodness...  But I am left wondering how to sing the Lord's song in a strange land.

I don't want to go back.  Sometimes when I'm tired I wonder if I am, and that scares me.  I can't quite believe how hard I've had to fight all these years to think and move: I had no idea how much effort it was all taking as it had become normal.

The other day I woke up at 4am feeling really frightened.  Not of anything in particular: just at the newness and strangeness of it all.  As I've tried to do at other times in recent years, I tried to work through those emotions using the acronym RAIN (Recognise, Acknowledge, Investigate, Non-identify).  It was helpful, and I was able to bring those feelings to God and acknowledge him in that state, which helped me to settle and go back to sleep.  It was also astonishingly easy: my head is just so much clearer these days, it's amazing!

At the moment Martin and I are working our way the story of Jesus' life as told by Matthew.  In all these churning feelings, with fear of going backwards but also fear of all the newness of going forward, I have taken comfort in these words of Jesus he recorded:


“Therefore I tell you, do not worry about your life, what you will eat or what you will drink, or about your body, what you will wear. Is not life more than food, and the body more than clothing? Look at the birds of the air; they neither sow nor reap nor gather into barns, and yet your heavenly Father feeds them. Are you not of more value than they? And can any of you by worrying add a single hour to your span of life? And why do you worry about clothing? Consider the lilies of the field, how they grow; they neither toil nor spin, yet I tell you, even Solomon in all his glory was not clothed like one of these. But if God so clothes the grass of the field, which is alive today and tomorrow is thrown into the oven, will he not much more clothe you—you of little faith? Therefore do not worry, saying, ‘What will we eat?’ or ‘What will we drink?’ or ‘What will we wear?’ For it is the Gentiles who strive for all these things; and indeed your heavenly Father knows that you need all these things. But strive first for the kingdom of God and his righteousness, and all these things will be given to you as well.

"So do not worry about tomorrow, for tomorrow will bring worries of its own. Today’s trouble is enough for today.

I don't need to worry about the future: God has done this work in me and it's up to him how it works out.  And he is good and to be trusted.  My role is just to keep putting one foot in front of the other (more literally now than before!) on the path he has for me.

And I can still enjoy the beautiful 'slow' things in life, too - like these gorgeous self-seeded violas just outside our front door :-) 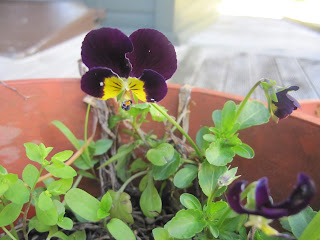