A long way to go

I thought it was time for a bit of an update...

It's a funny time at the moment.  I started seeing a physio about 6 weeks ago, since then exercise has been my main occupation every weekday morning.  He has me doing various strength-type exercises each morning (some 5 days a week, others two or three), plus twice a week I go for a walk for an hour or so and twice a week I go for a bike ride.  The bike riding's been a bit of a shock to the system!  At the beginning I could only go the length of our driveway a couple of times but I'm now doing just under 4km (which takes me 15 minutes) and I'm hoping to be cycling for transport a bit before too long.

In one sense, I've definitely made enormous progress in the past 4 1/2 months.  My physical abilities have gone through the roof.  This is my graph of how many steps I'm averaging per day (the numbers are the average of the two weeks leading up to that day - my steps are very variable per day, so averages make it easier to tell what's going on!) 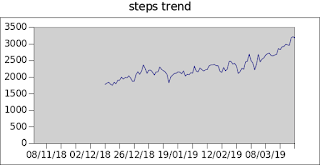 The numbers are still small, but the graph is just going up and up!

And that's good, but sometimes I feel scared when I look at that graph.  It shows so blatantly how things have changed...  Things have definitely changed for the better but, in some ways, even good change is disturbing.  All the old patterns need to be reworked and lots of things can't be taken for granted any more.  And that's upsetting, even when the change is for the better.

Also, whilst that graph is going up, if you know anyone who's aiming to do 10,000 steps per day you may also have noticed that my numbers are still really small.  Hence the title of this post: a long way to go.

I continue to rest heaps (I'm still only up 7-8 hours most days) and, with all the extra things I'm doing now (like all the exercise, as well as one new weekly commitment), time still feels really tight and it's hard to fit things in.  My hours up are overall increasing (although they've recently taken a bit of a dip after the big push to prepare for the Fairfield Conference a few weeks back), but I still need to schedule frequent quiet days and really space out 'people time'.  So there's a long way to go there.

So much of my life seems to be spent on exercise: which is OK for now, as it's for a purpose, but isn't what I want long-term.  The walking is fun but the rest is basically just hard (and sometimes quite painful) work.  And it looks like there needs to be plenty more of that hard work in my future.  My balance is really bad - going down steps or getting down onto the floor is dicey - and I'm much too stiff to run: we tried to run to catch a bus yesterday and I did this stiff, awkward, hugely-effortful "something" that definitely wasn't running and also wasn't much faster than walking.  And, despite all the exercise, I'm still super-unfit: not much at all will send my heart rate into insane overdrive.  So more work is needed if I want to manage normal things again.

And it's not just physical stuff, either: there's just so much to learn and sometimes I get sick of it all.  I've pretty much mastered getting on and off buses, but I have very little idea where anywhere is, so getting around is still a mission.  I'm doing much better at knowing how to make eye contact with people in groups, but I still need to work at it.  I'm confident now which side of the road cars come from, but I still have a fair bit of work to do learning to judge how fast they're moving.  I'm still not that great at recognising I'm tired, either, as it just feels so different from before.  And there's so many practical things to learn, too - e.g. how much dish washing liquid to use to wash the dishes, how to attach the bike pump - all of them small and easy to master, but present in a never-ending stream...  I've out-sourced most of those to Martin for the moment, and am only tackling each one when I feel ready, otherwise it's just too much.

I think about when I lived in Switzerland and how I sometimes got sick of being a dumb foreigner.  I had to ask questions about so many basic things (including how to pump my bike tyres - the valves there had a different threading I couldn't figure out).  People from church and work were very helpful, but often it felt like it would be nice not to need that help and simply be able to get on with stuff.

Don't get me wrong: I don't live in a constant state of overwhelmedness.  But partly that's because I mostly try not to think too widely.  I stay sane by avoiding thinking too much about either how much things have changed, or about how far there is to go.

I also make a point of celebrating small victories: noticing the little things that are improving.  The cycling's good for that: I literally manage a little more every single time, which is fun to take note of :-)  And yesterday we went to visit Martin's cousin on the bus, and had to change buses at New Lynn.  The bus home from there is the same bus I catch going home from physio: it was nice to be the one who knew what was going on for once, as I was able to tell Martin where it left from and which stop to get off at :-)

A friend asked me to record a wee video, to be used at their church service this morning.   They were going to be looking at the story of the woman Jesus healed from 12 years of bleeding (Luke 8:42b-28) and wanted to include my story as an example of how world-upending a healing after a long illness can be.  Much of what it says is what I've written here, but it's available below (or here) if you'd like to take a look.