A cycling cap for me!

Over the years I've made several cycle caps for Martin, as well as one for Sarah.  Now there's one for me, too!

I'll wear the cap under my helmet (making all that embroidery on the back extra-pointless, in a way).  The sharply-downward-angled brim will shield my eyes from sun and rain, although it only comes out a tiny way so won't protect my nose...  It also has a sweat band on the inside - and my mobile phone number, which will hopefully help it come back if ever I lose it somewhere.

I tried it out on Thursday, when I biked to my parents' for the first time.  It's not all that far away (a bit shy of 6km, similar to my friend Anna's house), but it does include a big hill going down and back up Blockhouse Bay Rd.

You can kind-of see in this screenshot from Google Maps how the road just disappears down the hill, and then comes up the other side similarly steeply. 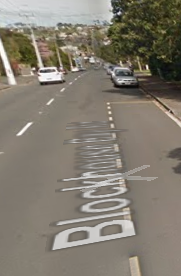 Still, we made it OK, despite a bit of a headwind all the way!


I did get a lift home, but I'm still stoked to have biked that far.

And isn't my mum's garden lovely?! 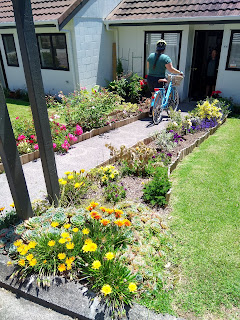 I especially like the mounds of glorious blue/purple lobelias.  We've got one at our place, too, and I'd been puzzling as to where it came from - after seeing Mummy's I realised it had popped up in a pot she'd given me :-)

And lastly, and not-cycle-cap-related, last weekend my very good friends John and Rose celebrated their 40th wedding anniversary.  I've known them since I was eleven, when they had three children and had been married about 8 years.  Here they are now, with 8 of their 11 children (9 were there, but one had to leave early), three sons-in-law and all five grandchildren.  It was so neat to be able to celebrate with them, at a lovely lunch organised by their two eldest daughters. 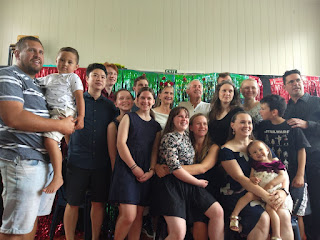