So many lovely things to see recently!

A couple of weeks back, I went for a wander around Western Springs.  It was lovely and full of life!

You can't really see, but one of the trees here has a bunch of white birds perched in it. 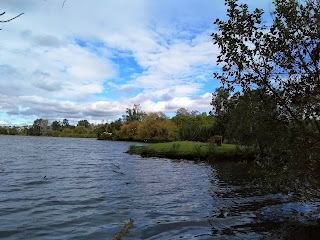 You can't really see here, either, to be honest, but this is the best photo I was able to get - they're royal spoonbills!  I was so surprised.  They were pretty much unheard of in Auckland when I was growing up, but apparently there's a well-established colony of them in Western Springs now. 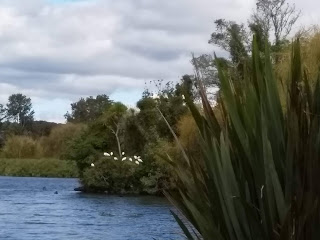 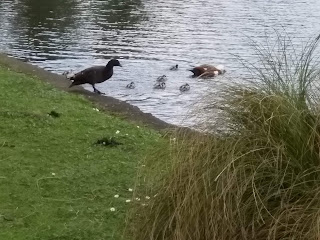 Back home, another delight has been this orchid.  I believe it's a Coelogyne cristata (no common name in English, but its German name translates to 'Snow Queen').  It was given to me maybe 10 years ago by my friend Muriel, who was much older than me and has since died.  It has never previously flowered, but I hung onto it because she's said it was so beautiful and I'm now glad I did.  Also, now I'm pretty sure I know what it is, I have some idea of how to care for it.  I expect its flowering this year is a direct result of Auckland's drought!  It comes from the Himalayas and is used to dry winters and monsoonal summers and won't produce flowers unless it has at least six pretty dry weeks in the cold. 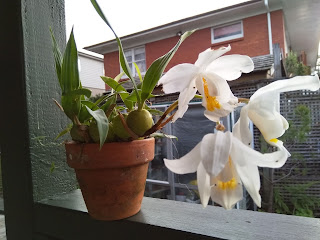 Most Fridays recently I've been visiting our neighbour Christina.  En route I walk past a fence where these gorgeous little purple/blue flowers are growing.  I don't know what they are, but I suspect they're also a kind of orchid. 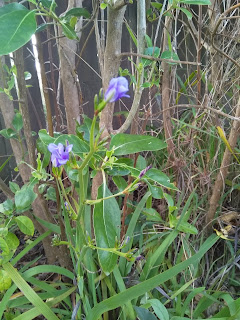 We're getting more and more flowers in our garden, too.  There are heaps of calendula marigolds in the vegie garden (intended to attract pollinators, although we don't really have much needing pollination right now), a few freisias in a pot and these violas (which really look more like pansies) in the flower bed. 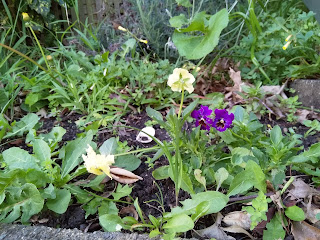 Our bluebells have also recently started to flower. 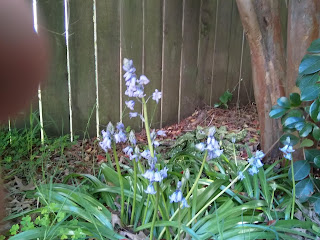 And this morning I went on a walk to take pictures of a few other local treasures I've been enjoying in recent weeks.  There are a number of stunning kowhai near us.  Many have already dropped their flowers and are now covered in leaves instead, but this one is still beautifully golden. 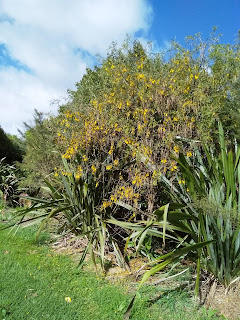 And this wee shrub has been a fascinating surprise.  It's a native, called karo, and I'd never heard of it till a few weeks ago.  I was at Eric Armishaw reserve and saw trees that I'd assumed were pohutakawa (very much the same leaves, and growing coastally) but they were already in flower and the flowers were definitely not pohutakawa flowers.  Eventually I identified it as karo.  I've since seen it pretty much everywhere I've been: Western Springs, around Oakley Creek and Phyllis Reserve, in Heron Park etc.  I'm delighted to be able to identify another native, but somewhat chagrined not to have even heard of something so apparently common.  Perhaps they're much more common around here than elsewhere in Auckland? 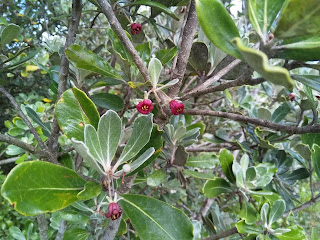 They seem to be almost at the end of their flowering season, and many of the flowers are being replaced by seed cases now.  There are still heaps of flowers on the ground though.  That's actually what drew my attention to the first one I identified - trying to figure out where the carpet of pinkish red flowers came from. 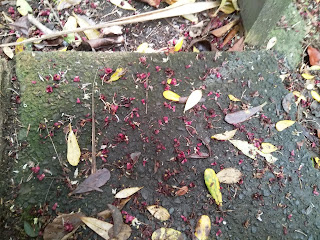 Near the Blockhouse Bay Rd. entrance to Oakley Creek, there's this one sweet little forget-me-not plant.  It makes me smile every time :-)  Sadly, for some reason, we can't grow the blue forget-me-knots here.  I guess we could if we bought seed every year, but whenever we save seed from the blue ones they grow back white the next year - no idea why. 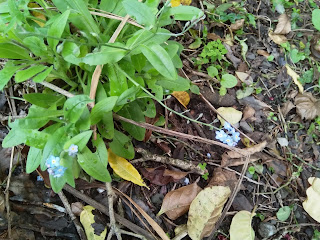 And lastly, two lovely things from our street.  A tree all in glorious blossom :-) 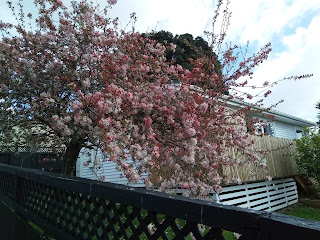 And some freisia-like flowers that show up in the berm outside one house every year. 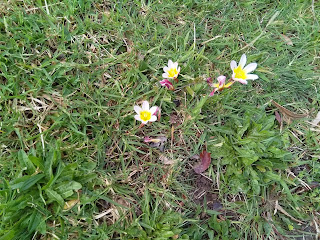 I'm amazed by how beautiful the world seems to be at the moment :-)

Email ThisBlogThis!Share to TwitterShare to FacebookShare to Pinterest
Labels: home