After church last Sunday, Martin and I headed off on an adventure! 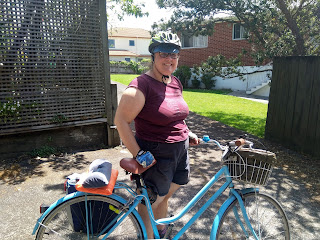 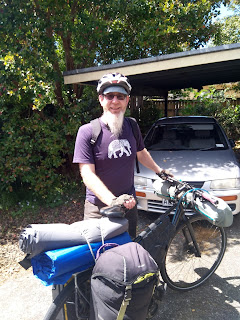 We were off to Ōmana Regional Park, on Auckland's south-east edge.  We chose it because it had a council campsite that was near to both a supermarket and the kind of public transport that takes bikes: this was our first try at bike camping together, and we wanted to make things easy for ourselves.

However, a week or so before leaving we discovered that the train into town was cancelled for the long weekend (so they could work on the cycleway into New Lynn, that runs right beside the train tracks) AND the ferry to Beachlands doesn't run on weekends and public holidays.  Time for a re-think!

We decided to continue more-or-less with our original plan, except we'd leave on the Sunday (rather than the Monday as intended), bike into town then catch the ferry to Half Moon Bay.  We'd stay a night with a friend at Eastern Beach before biking to Ōmana.  It's about 25km and Google reckoned it'd take 1h40.  Even if it took 3 hours we figured that was fine, and I've biked around 25km once before.  The route did look quite hilly, but I'm not used to interpreting such things and Martin thought it was probably fine, so we headed off.


We had a lovely evening at Eastern Beach.  Both of us went for a swim in the remarkably warm water, then we lay on the beach while Martin read to me from a novel we're enjoying together before fetching us yummy fish and chips.  In the morning we were treated to a delicious breakfast before heading off on the road.  At which point it quickly became challenging.

Google directed us through a lovely bushy park that was full of these amazing orchids (?): 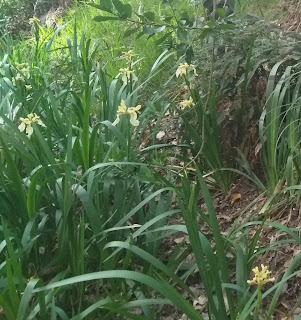 It was also full of steps - not ideal on the bike.  Martin took both bikes up one after the other, while I just walked myself. 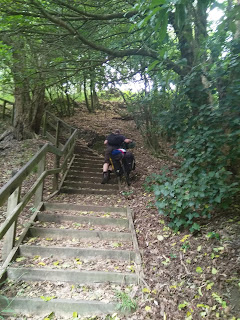 Then a bit along the road before another lovely park, this one fortunately with a nice concrete path and no steps at all. 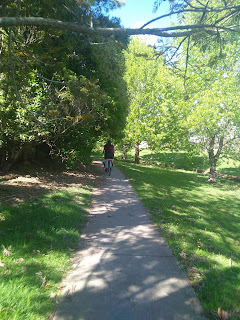 Then we rode around steepish roads around the edge of Howick (I think I walked at at least one point) before leaving the city and heading towards Whitford.

But also lots of bits too steep for me.  I'm not as strong as Martin, and my bike doesn't have gears as low, either.

We ended up in a pattern where I rode as far as I could, then stopped and dumped my bike and carried on on foot.  Martin rode his bike up, then came back and either pushed or rode mine up, too.  So I got my body the whole way to Ōmana myself, but not my bike!

It took ages, and I got into a very focused mode where I was just soldiering on and doing my best and hoping we'd get there eventually!  We had loads of sultana cake, bacon and egg pie and mandarins to keep us going, as well as a fair bit of water that we were also able to replenish at a petrol station along the way.  I realised I wasn't quite thinking straight as time went on, though, and I got tireder.  At one point Martin insisted we stop for at least an hour before going on, which didn't initially make sense to me but was a really good decision.  We found a quiet spot under some trees off the main road and he read to me for a bit over an hour, as I gradually cooled down and got some strength back.

And eventually, at 3.30pm (5h50 after we left Debbie's!) we were at the campsite.  We'd been actively moving for about 3h15 and traveled about 25.5km (of which I'd walked about 3km!).  Not the start to the holiday we'd been expecting, but we worked well together through it and it certainly was a good way to clear our heads of the worries of daily life :-)

Shortly after entering the regional park, we were greeted by this clear warning sign.  I took care to cross the cattle grate at right angles each time - it didn't look like much fun being the person on the sign... 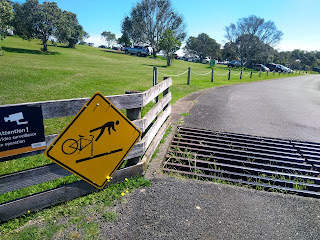 And then much of the rest of the holiday was spent like this - often with Martin reading aloud from his phone, other times just dozing or listening to audio independently. 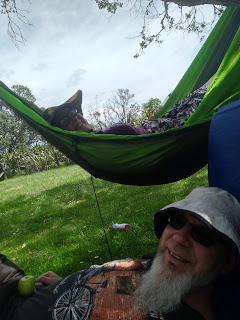 Here's our camp setup: the tent, our local picnic table and the hammock under the tree.  The loos are behind the camera, not quite as far away as the hammock tree in the opposite direction.  The campsite was pretty basic, with tent sites, 'vault' toilets, running water (including a cold-water shower) and BBQs (that didn't get hot enough to boil water) the only amenities provided.  But it was quiet and lovely.  We had this area to ourselves the whole time (and never shared the entire camping area with more than three other groups), although there is a path that runs along the right hand edge of this picture that was pretty heavily used. 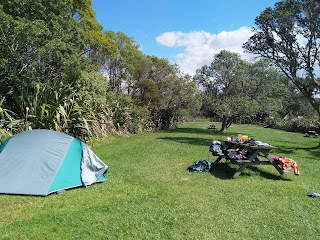 Another stunning view, a few minutes walk from our campsite:

Then, after one night at Debbie's and three nights camping it was off home - this time the easy way we'd planned, biking 20 min or so to the Pine Harbour ferry then catching the train home. 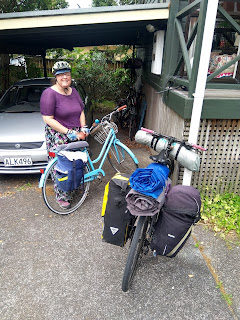 Overall a very successful trip and one we'll be repeating - perhaps going to Waiheke next time.  Even with the difficult day of biking, overall it was very refreshing.  It was nice to have so much time 'just us', to be completely cut off from all our daily work and to be a in a truly lovely environment.  And it was nice to have a holiday that won't hurt our neighbours in low-lying countries, as it was pretty low carbon, too.  About 49kg CO2e all up: roughly 23 on the ferries and train, 18 on all the unaccustomed meat, 8 on the camping itself and 1 on cooking gas.  The planet can cope with the two of us emitting about 200kg CO2e a month without warming, so that's more than we should be using for the average four days but pretty good for a holiday :-)