Visit to Ōtaki and Wellington

Straight after Christmas, Martin and I headed off with his parents to Ōtaki, a bit north of Wellington (where his sister lives) then on to visit some university friends in Wellington itself.  We were away for two weeks, getting back two weeks ago.  It was a bit of an exhausting time, as we don't get down that way very often and there were a lot of people we wanted to see, but it was fun, too :-)

I took all the opportunities I could find for swimming!

No one else was keen on swimming, but the games we brought proved popular :-)

Sandra and Chris's place had room for us to stay (as well as Mum and Dad), but I was keen to find somewhere else to sleep so I could go to bed early and have some time out during the day.  We'd thought to take our tent, but God had better plans!  Some of the neighbours were away and, when they heard we were coming, offered their place to us :-)

After Ōtaki, Sandra drove us to Upper Hutt, to visit Louise, a good friend from university.  Last time we'd visited, she'd taken a video of her favourite walk near her house.  This time, sans wheelchair, I was able to walk it with her :-) 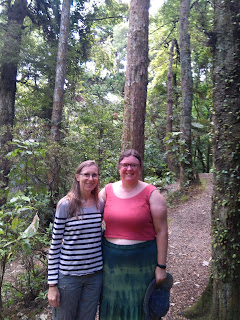 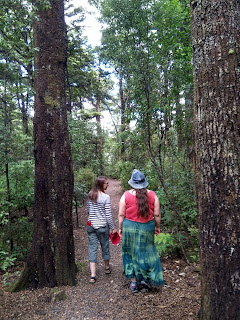 Then we met up with Beth, another university friend, who lives right in Wellington.

One day she took us up Mt. Victoria, then around the coast past Oriental Bay.

Another day, we met up with Michaela, our niece, and went for an explore of Somes Island.  I'd been there with my parents more than 20 years ago, when (I think) they'd done a lot of pest eradication but not much planting.  I remember it as being mostly paddocks and soaring black-backed gulls.  It's still full of black-backed gulls, but with bush over much of the island now.  Mostly fast-growing mānuka, kānuka, kawakawa etc. but with plenty of tōtara, too, that will grow huge in time.

As well as black-backed gulls we saw zillions of skink (two kinds, one maybe 6 inches long, the other more like 8-10cm), a little flock of kākāriki and some teeny schooling fish, but no tuatara).

The next day we spent the morning with Michaela, seeing a bit of her world.  I don't have many photos from that, but I was intrigued to spot this as we were walking to her place:

And then, walking home from the bus that day I heard a bird I couldn't quite place - perhaps a tūī, but I wasn't sure.  I eventually spotted it - a bellbird!  I saw them at Zealandia a few years back, but that's the first one I've seen in the wild :-)  It was just on the power lines, with a kererū in a tree behind it :-)

Then it was a quiet day at Beth's before making our way home!

Since then I've had two very quiet weeks, and am hoping to start getting stuck back into things in a week or so - we'll see!

Once every three years we do a holiday where we fly domestically.  This time we only flew one way (we drove down with Martin's parents) but it was still a pretty carbon-intensive holiday.  We reckon we generated about 505kg CO2/e (about the amount the planet can absorb per person over five months!!).  110kg of that was food and other sundries, but almost 400kg of it was transport - mostly the flight but also a great deal of driving and the ferry to Somes.