Over January and February I've been reading Hiakai (which means desiring kai, i.e. hungry).  The first half of the book is an exploration of pre-European foods in New Zealand and the second half is a recipe book, using some of those ingredients in pretty fancy ways.  Many of the recipes are too fussy for me, but I still gleaned heaps of good ideas, plus the book has inspired me to learn to identify and use more New Zealand native herbs! 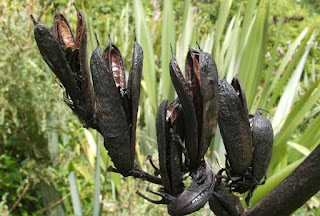 Since reading it, I've dried a bunch of harakeke/flax pods and extracted some of the seeds.  They're nutty but also papery, so not that good for munching on despite a pleasant flavour.  I'm going to try sprinkling some on salad, plus the book includes a recipe for chocolate truffles that looks nice.  Unfortunately, my pods didn't open naturally, so extracting the seeds was heaps of work.  I think that's because I chopped both ends off the pods (as they were hairy and I didn't want hairs in the seeds) and in the process removed the hinge that makes them open.  Oops!  There are loads of harakeke plants still with pods on at Oakley Creek, so I think I'll just pick more rather than persist with opening these. 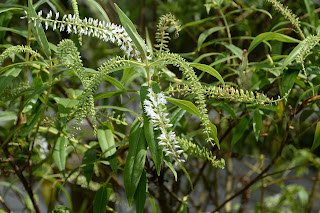 The book talked about two plants with which I wasn't familiar: koromiko and tarata.  Koromiko is a kind of hebe, which I've since found examples of on the edge of Gittos Domain going down Blockhouse Bay Rd towards the beach, and on Whakawhiti Loop near Rosebank Rd.  Apparently it makes a nice tea which is also good for dysentery, plus you can use it in stews like bay leaves.  However, Martin and I are unconvinced!  It's handy we know where to find a good dysentery remedy if the apocalypse comes, but the tea just tasted vaguely 'green' - no particular flavour, even with a great many leaves.  I don't think we'll be trying it in a stew. 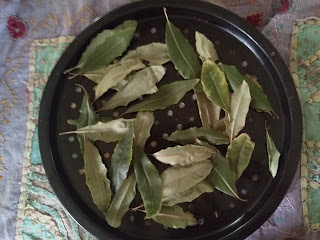 Hiakai also had a lot to say about tarata, a pittosporum with lemon-scented leaves.  It looked vaguely familiar, so I read up about how to identify it and started keeping an eye out.  On Wednesday, swimming at Blockhouse Bay Beach, I found several.  On the bank going up behind the sandy end of the beach is a huge tree.  All but one small bunch of leaves were well out of my reach, though, which wasn't ideal - although it was so big it may well have been strong enough to climb!  Still, at least I now knew I could confidently identify it - the leaves I picked did, indeed, give off a strong citrus scent when crushed.

Then, walking up the hill to the bus, I found a much younger specimen, on the edge of Gittos Domain just a few bushes along from the koromiko I'd spotted earlier.  Young specimens have leaves all the way down, and I picked lots.  Some of them are now drying in our hot water cupboard, with the rest infusing in a jar of unscented coconut oil.  I plan to use the scented oil in cosmetics (it was a traditional Maori perfume).  The dried leaves will get used in desserts.  There's a tarata marshmallow recipe I copied from Hiakai that I'm keen to give a go, plus I think they'd make an excellent gelato (using the method I use for kawakawa gelato).

I've since learned that the mature trees ooze a resinous sap that was traditionally used as a lemon-scented chewing gum.  I'll have to see if I can spot signs of that on the mature one at Blockhouse Bay Beach when next I'm there!

I'm also keen to learn how to identify matipo, soon - a bush/tree with apple-scented leaves.  Apparently that's pretty common, too. 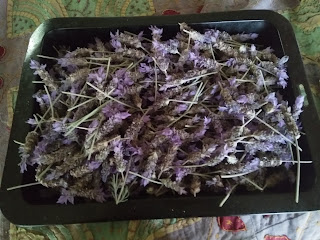 And lastly, a house on our street is scheduled to be removed on Monday and the section leveled so they can build six town houses.  I noticed it had heaps of lavender flowering out the front, so this afternoon Martin and I went to pick some before the bulldozer destroys it!  I use lavender buds in both tea and baking and, whilst we have recently planted a bush of our own, it'll be a few years before it's producing all that I would like to use.  In a short time we managed to pick enough flower heads to fill our roasting pan!  Once they're dried and I've rubbed out the buds that will hopefully yield enough to tide me over till ours grows bigger.

We also picked some beautiful flowers (some kind of lily), a couple of cherry tomatoes and one banana flower.  There were actually three banana flowers, but Martin drew the line at one - I like eating them, but he really doesn't.  It would have been lovely to dig out some of the banana plants to see if we could establish them here, as they were clearly fruiting well in a location that must have a climate very similar to our garden, but we don't really have the time or space for that right now.