Over ANZAC weekend, Martin and I headed off for our second ever bike camping adventure: four nights camping on Waiheke :-)

Here we are at the local train station, about to start our adventure. 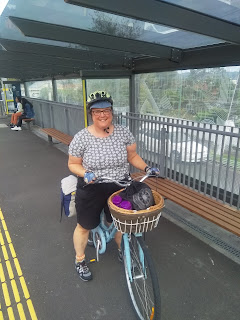 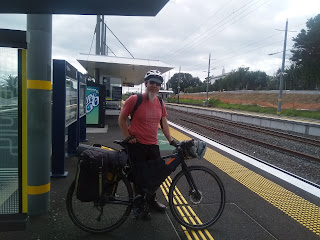 After the train it was onto the ferry for Waiheke.  It might look like I have my normal bike there, but I'd actually swapped bikes with a friend who also has a pale blue bike with a basket and a step-through frame - but hers has 21 gears to my 7.  We're hoping getting me a bike with more gears will enable me to navigate bigger hills when we go away on holiday, so borrowing Rachael's bike helped me test that out. 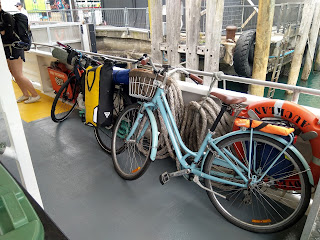 It was a gorgeous day when we arrived at Matiatia Wharf :-) 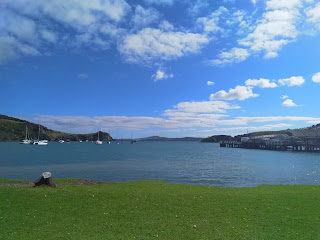 It was also a bit later in the day than was ideal - around 2pm - and I was less rested than was ideal.  We'd had a bit of a chaotic morning doing most of the packing at the last minute, as well as showing around a friend who we're hoping will do some work on our house.  Despite the scenery and the fact we were on holiday, I was decidedly grumpy :-(  I took some panadeine in the hope that would help and we headed off (here's the map of our route, more or less).

Google had reckoned it would take a bit under an hour, but we took 2h40 (admittedly with a half-hour stop at the supermarket and maybe 10 minutes attempting to explore the wetland around Rangihoua - where it turns out you can't get close enough to the water to see anything).  I also was shocked by how little power there was in my legs as I made my way up the first hill - I ended up walking, which was what the extra gears were supposed to avoid.  All was revealed as we headed up the second big hill into Surfdale and I found myself having an asthma attack.  Presumably I'd been low on oxygen all the way - I've had that happen before, where I notice I'm running on 'low power' long before I sense anything actually wrong with my breathing, but it hasn't happened often enough for me to reliably recognise it.

I took my inhaler, rested for a bit and carried on, but I was definitely running on low power the whole way.  I got myself all the way to the campsite, but a couple of times I dumped my bike and plodded up a hill whilst Martin came back to ride my bike up after his own.  Not an ideal start to the holiday, but we made it!

Here I am shortly after arrival at the Poukaraka Flats campground in Whakanewha Regional Park. 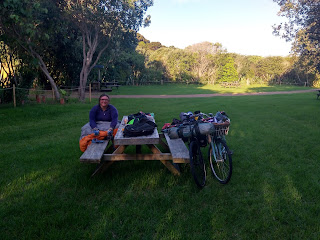 Martin's stayed there before, and it really is a lovely spot, with regenerating bush all around and the sea maybe 10m or so from our campsite (through the trees). 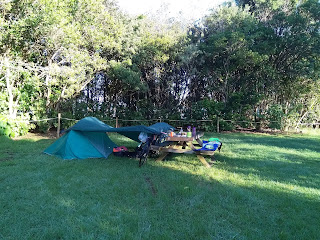 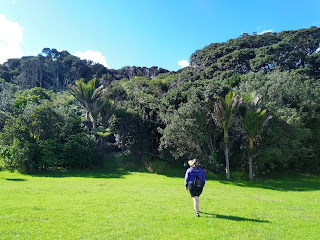 It was also better set up than I'd expected.  All the Regional Council campgrounds provide clean running water, toilets, and gas-fired hotplates (which get hot enough to fry stuff, but not hot enough to boil water).  This one also had a sink to do your dishes in: 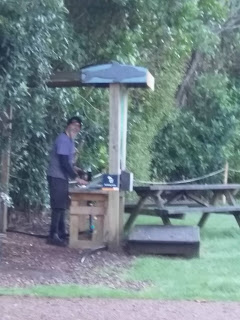 The orangey things in the middle of the next picture are cold-water showers in privacy boxes.  They also had showerheads in a few other places in the open, but these were super-convenient as there were places to put your stuff and you didn't need to bother with togs for modesty.  It was lovely to look up through the trees to the sky while I showered, and the water was remarkably warm in the early afternoon - it must have been stored somewhere the sun could get to it, although I didn't work out where.

Towards the right of the picture you can also see the extensive rubbish station, with bins for landfill, recycling and compost.  It was handy not to have to carry out all the rubbish we generated, although they asked you not to compost orange peels etc. so we did bring all our smelly compostables home. 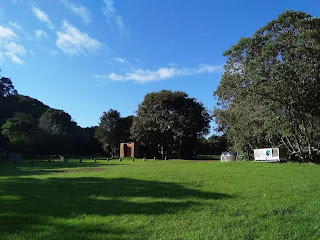 Another delight of the campsite was all the birds.  There were heaps of tui and piwakawaka, and I spotted several riroriro (the grey warbler - a bird I often hear at home but rarely see), but the star of the show was the banded rail.  They're pretty rare and I'd never seen one before, but there were quite a few around the campsite.  They turned out to be a lot of fun to watch as they darted around with great inquisitiveness. 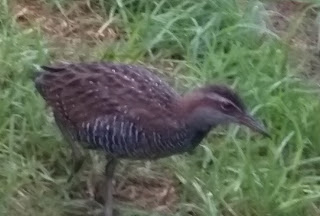 They were clearly very used to being around humans and came very close on many occasions.  This is one of Martin's early close encounters, in the vestibule of our tent, but later one got much closer and actually pecked his toe! 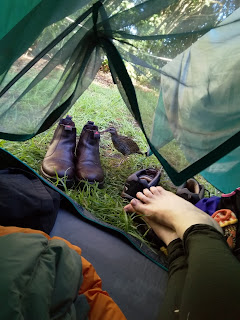 The pukeko were also fun to watch and there were great hordes of those.  They're surprisingly big up close.  They were also keen to explore anything and everything, so we quickly learned to keep our tent shut and all food tucked well away.  One time I found our (somewhat nipped!) garlic bulb tossed away in the grass, and a few times we had to clean their poo off 'our' picnic table! 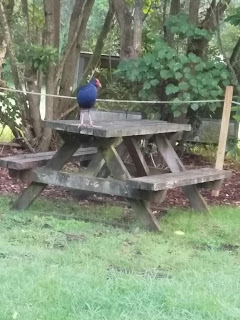 I'd hoped to do the Whakanewha Park Walk on the Sunday (the middle of our three full days on Waiheke), but I didn't really have the oomph.  Instead, we made our way over the bluff to the other side of Whakanewha Bay, going through some established coastal bush and past heaps of kumara pits.  Here's Martin at the top: 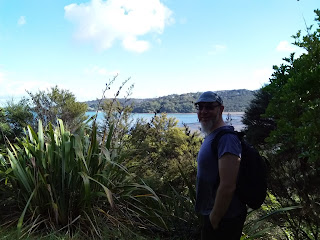 And the other side of the Bay.  We'd taken binoculars and I spent a while watching the shore birds - including New Zealand dotterel, another rare species that I hadn't seen before, as well as oystercatchers, pied stilts and white-faced herons. 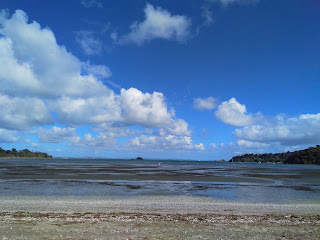 Then Martin left me to doze by the sea for an hour or two (there was an awful lot of dozing on the holiday, it was great!) while he went off to gather pipis for our dinner.  I'd never had pipis before, but he gathered them for our dinner each day we were there and they were really yummy.  Low tide was late morning/noon-ish, so we stood them in water to keep them alive so they didn't go off before we ate them.  Here's the pot of pipis along with the trusty solar panel we used to keep our phones charged :-) 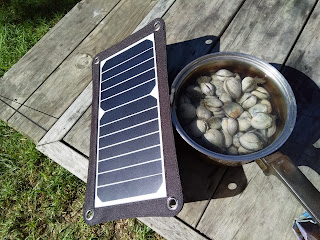 And the shucked pipis.  They're tiny - 15mm across if you're lucky - but full of flavour.  We were allowed to gather 50 per day. 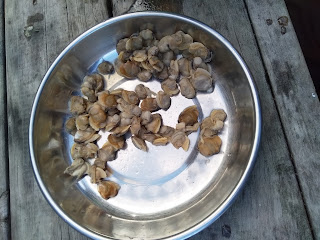 The only other thing I did for the whole holiday was wander out to the rock pools one morning to see what I could see.  It was fascinating how different they all were.  As well as seaweed, this one mostly has limpets, anemones and tube worms, but others were much more open and were home to crabs, catseyes and even one shrimp!  That reminded me of when I was in 7th form and we collected buckets of seawater for Biology, sieved out all the shrimp and then used them for animal behaviour experiments of our own devising.  Mine involved seeing if a shrimp could learn not to go down one end of the tank if I hit it on the head every time it tried.... Hopefully they got us to use a species that doesn't feel pain?!?! 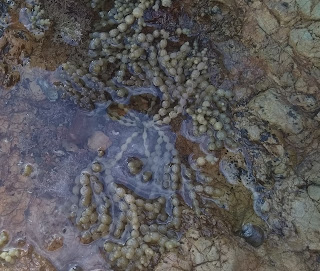 There was also an absolute abundance of mushrooms.  I'd love to learn more about edible mushrooms one day.  We must have seen around 6-8 different kinds, and at least some of them were probably edible - we found a family who'd come down looking for oyster mushrooms for their dinner, although I don't know if they found any.  Their daughter did, however, find a patch of 'unusual mushrooms', to which she alerted her parents with great enthusiasm.  Her dad was keen to tell me how to go about taking them and how to identify them for next time.  I didn't really expect to find Class A drugs just sprouting out of the ground at a Regional Park campground, but there you are! 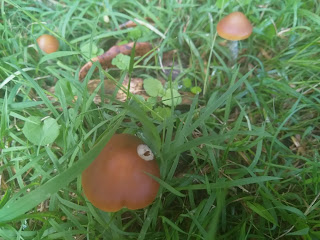 And then, after a delightfully relaxing few days, it was time to head home.  This time I took extra puffs of my inhaler as a preventative before heading out (and a few more when I felt my breath was catching a wee bit) and did fine on the bike.  I stopped and walked one short steep bit right at the beginning, but otherwise biked up all the hills without any trouble at all.

And, despite stopping to catch my breath a few times and pausing at this hugely scenic point (between Surfdale and Blackpool Beaches) we were back in Oneroa in just under two hours :-) 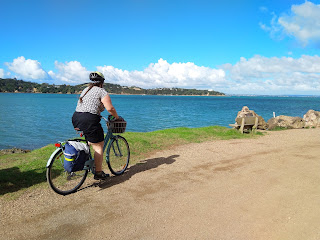 We went for a wander around the Oneroa Art Path (a sculpture trail) but didn't find much of interest, to be honest, although 'Comfort Stops' by Peter Lange (which Martin is sitting on) was fun. 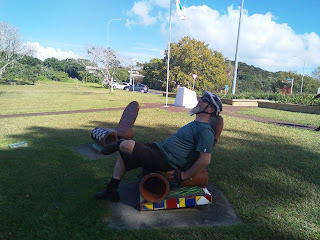 Then we stopped on the grass behind the library for a lie down before heading off to the ferry and home. 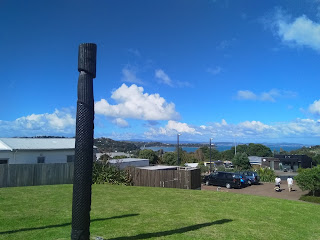 It was a lovely trip, and the weather was kind to us even so late in the season.  We only once had to put on raincoats and brave the rain to go to the toilet in the evening and, whilst the last night was pretty cold, we had enough warm gear to sleep comfortably.  One day Martin even swam in the sea!  (As did I, but that's much less remarkable...)  The bike with the extra gears worked well, and I'm keen to upgrade mine as soon as we both have the brain-space to think through options.

It was a bit more expensive than budgeted, as the ferry to Waiheke costs around $10 per trip (each) more than the one to Ōmana, but it still came in at around $250 for the two of us for four nights which isn't bad at all!  And it's a pretty low-carbon way to get away: we reckon we emitted about 64kg CO2e all up (30 on transport, 21 on less climate-friendly food than we usually eat, and the balance on the campsite and cooking gas).  It doesn't seem right for our fun getaway to come at the expense of our neighbours in low-lying countries, so it's always nice to keep that down :-)