Martin and I are both fairly hard on our T-shirts (and wear T-shirts a lot), so I have a ready supply of old T-shirts for crafts.  Originally I was using them to make rag rugs (there's one about half-way down this blog post); but most people I think are likely to want one of those have one now, so before Christmas I was looking for new ideas.  Here's what I ended up with :-)

T-shirt pompoms.  Like regular pompoms, but bigger.  You cut the T-shirt into quite narrow strips, pull the strips to make them curl in on themselves, then make a pompom (something I don't think I've done since primary school!).  It takes about one T-shirt per pompom.

I also learned how to make these little storage bowls.  They're quite thick and I think the same technique would be great for hot mats.

Martin gets a cold head at night and has long slept in a balaclava.  As part of his Christmas present he got two new balaclavas (winter and summer weight), both made out of old T-shirts.  Here he is in the summer one: 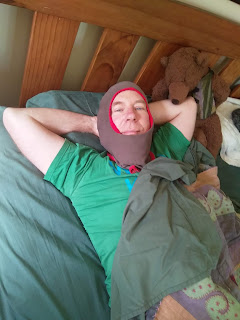 So that was gifts, but I also realised I was using T-shirts somewhere else this Christmas.  For advent we light little oil lamps: 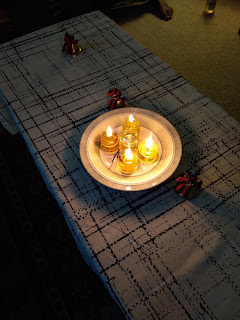 
After making all the T-shirt gifts, I found I had lots of partial T-shirts left over.  I cut them up to make balls of T-shirt 'yarn' (which was quite time-consuming) then made myself a very colourful braided belt. 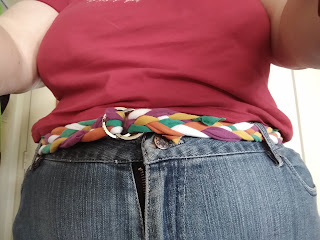 I made the braid too long (it said to use enough 'yarn' to go around your middle twice - that turned out to be wildly excessive), so I made the remainder into a headband :-) 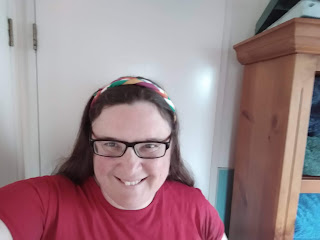 I still have a fair bit of T-shirt yarn left (in a pretty random assortment of colours and lengths).  I'm thinking to turn it into a very multi-coloured braided rug (instructions here and here), either for our bathroom or the front door :-)
By Heather - January 10, 2020