Our good friend Temi recently moved to Taupo for work; Martin and I decided to go and visit her for a week over Christmas.

To reduce the carbon footprint of our trip, we went by bus,* including catching the local bus into town to catch our bus.

* a long-distance bus in New Zealand has about a sixth the carbon footprint per person as the total footprint of an 'average' petrol car traveling the same distance.  That means your emissions are about equal if you have all five seats in the car full, but with just the two of us it reduced our emissions to a third.

I found it very satisfying to travel all the way to Taupo without using a car, although it did take a fair bit longer.  It should have been about 6.5 hours door to door, but was just over 7 due to both traffic delays and someone not getting back on the bus in time at the lunch stop.

We had five full days in Taupo and I swam in the lake on four of them :-) 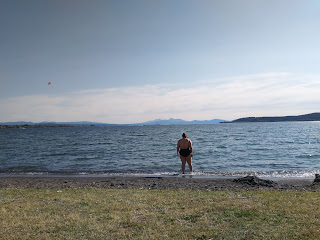 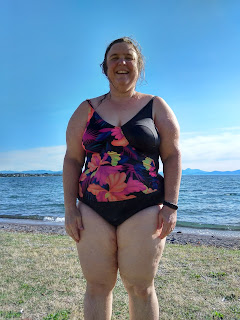 It was cold, but not too bad late in the day when the water in the shallows had warmed up, and so much fun!


On Boxing Day Temi was kind enough to drive us around a bunch of sites I was keen to visit.

Coming home we caught an Intercity bus, which took a different route and had more stops than the Skip bus we'd gone down on.  It took a fair bit longer (nearly 8 hours, door to door) as there was a scheduled driver change at Pokeno but the driver coming down from Auckland was stuck in Christmas holiday traffic and we ended up waiting about an hour for him to show up.  Still, I managed remarkably well energy-wise, although I suspect a bus trip to Taupo is probably my limit distance-wise for now.


Overall, our carbon emissions for the trip were about 100kg CO2e.  That's about the same amount the planet can absorb per person per month, so not too bad for a special treat for two!  That's composed of: