How we buy creates the world in which our global neighbours live.

How can we buy things in a way that helps the poorest people in the world flourish? For Martin and I, we've decided to:
Below is a printable summary of our buying policies (click here to download as a pdf), followed by more detail on the human rights issues involved in various categories goods we buy frequently and how we respond to them. 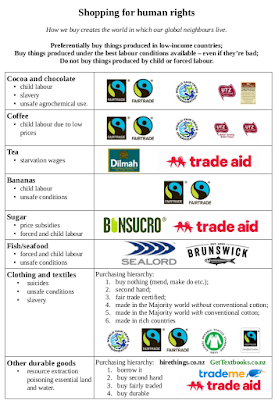 Clothing and textiles
Other durable goods


There is a lot of both child labour and slavery in cocoa production, as well as agrochemicals being used in ways that are unsafe for the growers.  We avoid supporting slavery and expand the availability of good jobs in the cocoa industry primarily by buying products certified under one of the following schemes:

You can read more of our thinking here and find a list of cocoa products available in NZ certified under those schemes here.


Most coffee is grown on fairly small family farms where issues of slavery are much less prevalent.  However, the prices they get for their crop are often so low that farmer families can't get by without keeping their children out of school and having them work alongside them.  To buy coffee where the farmers have been paid a liveable wage and had the means to send their kids to school, look for the same three certification marks.

You should be able to find a wide range of coffee certified under one or other of these schemes in any supermarket in New Zealand.  The exceptions are instant and decaf.  For both of these, you need to go to Trade Aid (find your local store here or buy over the internet).


Unlike coffee, tea is generally grown on large plantations.  Neither child nor slave labour seems to be particularly common, but workers are often paid so little they are literally starving, fuelling the sale of children into slavery.

To support plantations that pay proper wages, we buy our tea from Dilmah.  This is available in every supermarket in New Zealand and comes in a wide range of varieties. 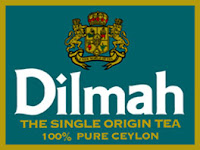 Dilmah claims to pay their workers well-above-average wages for Sri Lanka and to do a lot to ensure plantation workers' kids are able to get an education.  These claims aren't verified by a third-party certifier, but we think there's good reason to believe they're true.  Dilmah is such a global giant and makes these claims so forcefully that, were anything else to be the case, they would surely have been debunked by now.  I haven't found anyone arguing against their claims.  In addition, we like that Dilmah tea is processed and packaged in Sri Lanka, further helping their economy.

If you would prefer to buy tea backed by independently-verified fair trade claims, you can buy WFTO-certified tea from Trade Aid.  They stock English Breakfast, Earl Grey and Masala Chai black teas as well as green and roobois teas.  They do mail order, or you can find your local shop here.


Banana growers are often subjected to very unsafe working conditions, child labour is not uncommon, and banana plantation owners are notorious for squashing any efforts workers might make to organise and lobby for better working conditions.

In order to buy bananas produced under better labour conditions, look for the FLO trade-mark on your bananas: all the major NZ supermarket chains carry them, under several different brand names.

To avoid supporting child and slave labour, we now buy Countdown own-brand sugar, the only Bonsucro-certified sugar we are aware of in New Zealand.  Bonsucro sugar has to meet strong labour rights standards which are rigorously audited by third-parties who interview staff and visit both farms and mills.  With  one exception, no Bonsucro-certified farms are in high-income countries with a subsidised sugar industry.  The majority of Bonsucro-certified sugar comes from India and Brazil, although I expect Countdown's likely comes from Australia.

I wasn't previously familiar with Bonsucro certification, but it turns out it is widely used in Europe, especially for ethanol produced from sugarcane.  I couldn't find anyone complaining that it doesn't uphold the standards it claims; instead I found academics promoting it and encouraging NGOs to become involved with it.  Bonsucro is also a member of the ISEAL alliance.

Countdown don't do the more sophisticated varieties of sugar such as golden, muscovado and demerara.  For these you have two slave-free options.

If you'd like to read more, I have a whole blog-post on sugar here.


Fish and other seafood


I've only recently really registered the allegations that slavery is widespread in both the fishing and seafood processing industries.  It is clear that terrible working conditions are common.

I am currently researching the New Zealand retail fish industry to see what I can buy without supporting such practises.  You can follow my progress here; I will update this post when I have something conclusive to say.

In the meantime, I am very confident that the entire Sealord range is child and forced labour free and that they strive to ensure workers are treated well throughout their supply chain.  For sardines and kippers, Brunswick is also child and slave labour free.


We see the key human rights issues in clothing and textiles as being:
In some cases, it is not possible to avoid supporting one or more of these abuses whilst still remaining decently covered!  So, rather than only buying clothing and textiles with particular endorsements and otherwise doing without, we buy products that fall as high as possible up the following hierarchy:
I expand my reasoning for this ranking here.

We generally manage to obtain everything we need from the first three steps of this hierarchy, although we occasionally have to go as low as step 4.


Production of the goods we use often results in environmental damage that poisons the land and water on which the poorest of our global neighbours depend.

As for clothing, we use a hierarchy to minimise harm: 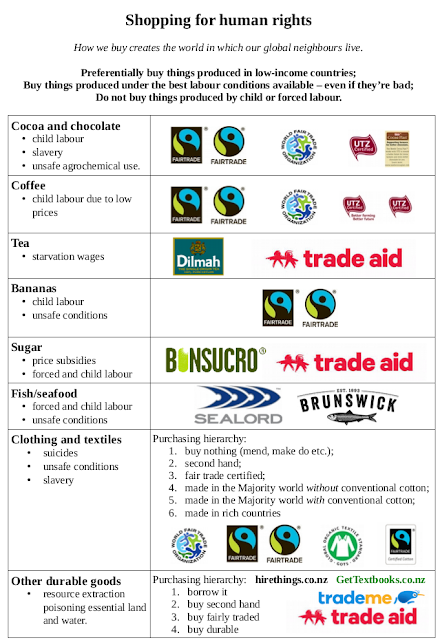