Our street had a really good Neighbours Day celebration yesterday.  We got some council funding to help with costs, conditional on us writing a report on how things went.  Below is my report, along with some photos of the event. 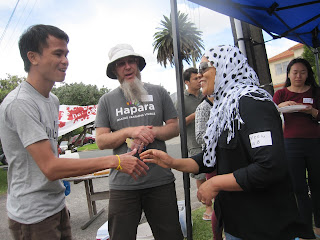 Our street celebrated Neighours Day on March 26th from 11am-2pm.  We used the PakNSave vouchers to buy BBQ supplies and pavement chalk for the kids.  A bouncy castle, balloons, face painting and play-doh were also provided by various people from the street.  We set up tables with lots of shade and encouraged people from the street to come along and bring a chair and some finger food to share. 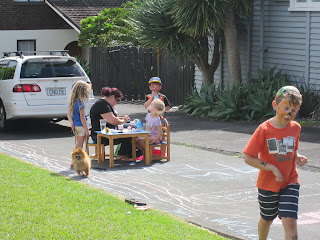 We advertised the event with posters in the street, two drops of flyers to every letterbox in the street, a notice on Neighbourly and a notice on the street's newly created Facebook page.  The Facebook page was mentioned in all advertising as we hope that this will be a forum for keeping people from the street in touch with each other and discussing local issues year-round.  It currently only has 15 members but we are continuing to promote it.  Two more people have joined it in the 24 hours since our event. 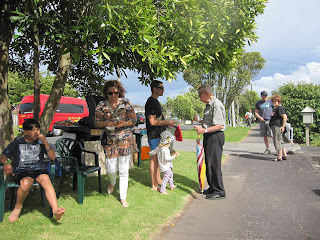 The weather forecast had been for heavy rain on the day but we didn't really have a back-up plan so we just went ahead with the event as planned.  As it happened, the rain didn't start until 1.15pm so wasn't much of a problem, although the sky was very grey and overcast. 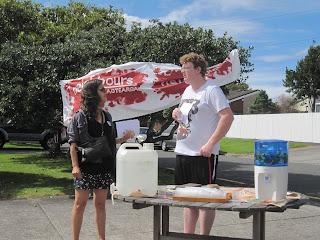 People from around 30 of the approximately 110 houses in the street attended.  The adults seemed keen to meet each other and I rarely saw an adult on their own (i.e. with no one talking to them) although the kids didn't seem to mingle quite as well.  They seemed to be having fun, though.  The facepainting was very popular with the kids, as was the pavement chalk.  The playdoh and bouncy castle didn't seem as well used as in previous years.  Several people brought their dogs with them and these were a popular attraction,. 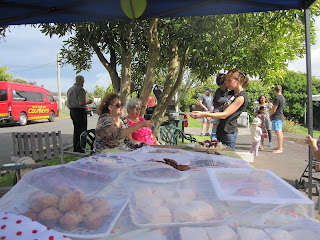 This is the 6th Neighbours Day we have had in the street and the event now feels well-established and popular. This was the first year that Sue (who initiated Neighbours Day in our street) wasn't around, but the people who helped her organise it in previous years were keen to keep it going.  We had an organising group of 10 people (8 who had been involved previously plus two new ones).  In addition, others who weren't part of this core group took on roles such as delivering flyers, manning the BBQ and packing things away after the event. 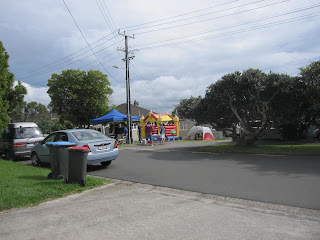 We are looking forward to Neighbours Day 2018! 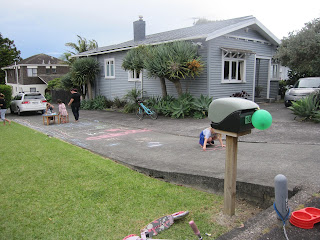 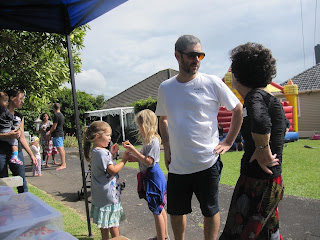 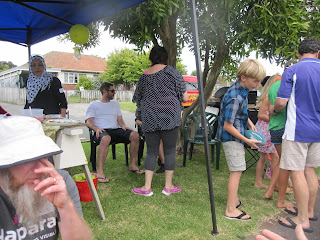