As I said earlier, I've been lower in energy since our holiday in mid-June - although the reduced energy is carrying on so long it may be simply because of winter, rather than the holiday.  The last 2-3 weeks, though, I've been much less frustrated about it all - I've been mostly content, albeit punctuated with the odd patches of extreme panic!

One thing that has made a huge difference is a 'breath prayer' I've been praying.  If I wake in the middle of the night and can't sleep, I start saying "You are the true vine, help me to rest in You."  If I find myself fretting during the day, I do the same.  God has used this to really transform my attitude :-)

The idea came out of a retreat I did online at the end of May.  The woman leading it got us to reflect on the various 'I am' statements of Jesus that are recorded in the book of John in the Bible:
She asked us to reflect on which of these we needed, and the one that stood out to me was the vine.  Jesus talks about how branches that aren't attached to him don't bear fruit, but that those that are bear a great deal of fruit.  I was feeling the weight of all the work I needed to do, and I realised I couldn't do it unless I was also resting in God.  So I have been praying about that frequently (and sometimes desperately!) ever since, mostly just by repeating the words: "You are the true vine, help me to rest in You."

As I have relaxed into that, I've been finding I can do the work I need to do, but also set it aside and do the other things that make for a balanced life, too.  I've been sewing, and recently completed a new pannier for Martin's shopping bike: 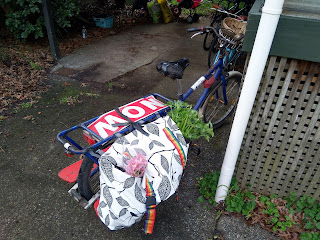 I've been feeling more comfortable about the time I take to visit people:

I've been enjoying noticing small details on walks around the neighbourhood:


I've found the time to make a new batch of jelly tip slices (after we stopped eating unfairly traded chocolate, I figured out how to make jelly tip ice creams.  They're a bit of a hassle to make, so we started making them as slices instead.  Jelly tip slices turn out to be not only easier but, in my opinion, yummier, as you get jelly in every bite!) 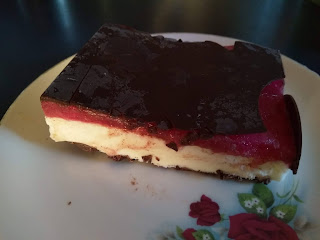 And, thanks to a recently purchased neoprene top and beanie, I've even got back into swimming in the sea :-)

All of that whilst having a huge Just Kai work load!  I'm finding I'm sufficiently at peace to do the work in the time I have available, but to also take time for all the other things that help keep life balanced.  I did get into a huge panicked tizz last Thursday when trying to work out whether or not it was wise to swim (as it takes a heap of time), but mostly I'm on an even keel again which is so nice.  Praise God!
By Heather - July 27, 2020